2 women wrapped up in a colorful tradition

2 women wrapped up in a colorful tradition 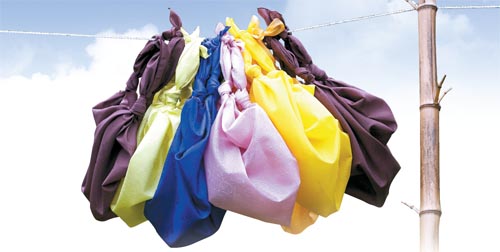 Until recently, bojagi, or Korean wrapping cloth, was considered beautiful but irreparably old-fashioned in an era of shopping malls, leather backpacks and plastic bags. But before Koreans could begin to afford these luxuries in the 1960s, bojagi cloths were used for nearly everything: to carry books, groceries and food, and as head scarves, wallets or even wall decorations. Bojagi were also often wrapped - particularly by older people - around gifts, like bottles of freshly pressed sesame oil or even animals for grandchildren living far afield. Holding a live chicken wrapped in a bojagi, a grandma might beam with delight, imagining the nutritious meal the fluttering fowl would provide her descendants.

In the face of rapid industrialization in the ’70s, however, bojagi were overshadowed by new, more specialized containers and bags. It’s no wonder bojagi have grown rare, now used only on special occasions like New Year’s Day, when department stores promote gift sets wrapped in them.

Could that all be about to change? Lee Hyo-jae and Patricia Lee are out to bring back the rainbow-colored wraps, reinventing them as the ideal “eco-friendly bag” in Korea and the United States. 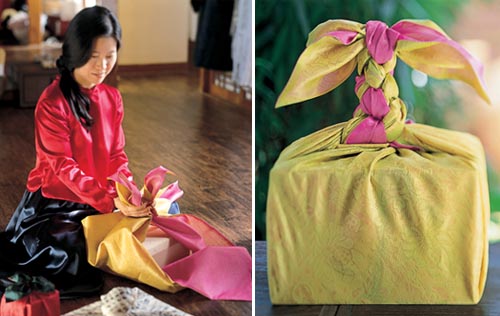 Lee Hyo-jae is a designer of traditional Korean clothing, and her profession drew her initially to bojagi. “It was very natural for me to use bojagi in my everyday life because I make hanbok. Whenever I finish making a hanbok, I wrap the traditional garment and other wedding gifts with bojagi for my clients, because it’s traditional,” said Lee, 52, at her two-story office in Seongbuk-dong, northern Seoul.

Although Lee rose to fame for her hanbok first, later earning the nickname “the Korean Martha Stewart” for her eco-friendly lifestyle and cooking, gardening and other homemaking skills, it was bojagi that covered her office’s tables and walls, from the entrance to the kitchen and the tea room.

Behind Hyo-jae, who sat next to a white kitchen island table, Fissler pots, wrapped in bojagi, sat neatly arranged on a metal rack, while tissue boxes wrapped in various candy-colored bojagi lay scattered about.

“I’ve been wrapping things all my life,” Lee said, “be it a watermelon, a dustpan or a pair of sneakers. And I found myself enjoying moments when people marvel at my bojagi wrap before opening their presents.

“I think I’m kind of addicted to that moment, and it helped me get the knack of wrapping bojagi with all different shapes, knots and bows.”

Lee has been in the hanbok business for 25 years. Her decades of bojagi wrapping brought her chronic wrist problems that forced her to wear casts for months. But that hasn’t stopped her from dreaming up even bigger things.

“While wrapping gifts with bojagi one after another at the request of acquaintances, I realized people were starting to talk about environmental issues, and an ‘aha!’ moment hit me.

“I thought I could do something fun with these [bojagi] because almost every housewife has at least one bojagi in their kitchen drawers,” Lee continued. 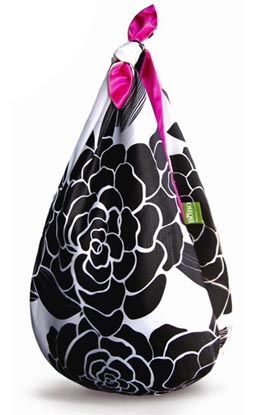 There began yet another career: bojagi artist. Lee published a book in January 2008 based on her years of experience. It shares her witty and creative ideas on how to wrap bojagi, featuring festive knots and bows that look like dumplings, blooming flowers or topknots. Wrapping a bottle of wine, Lee braided the bojagi to make the wine bottle look like a cheery girl with long hair. Using red and green bojagi, Lee wrapped small tissue boxes and stacked them. Ta-da! A bojagi Christmas tree.

With a few touches, a piece of cloth becomes a tote bag, a backpack, a cushion cover, a pouch for sanitary pads. Lee also uses bojagi for picnics or a blanket to warm herself up.

Just like her previous homemaking books, which became instant hits, the bojagi book is selling well. According to the publisher, it has gone through eight printings so far.

“Since people hardly read these days, we call it a success if a certain book is printed more than two or three times,” said Son Kyung-hee, an official at the marketing team of JoongAng Magazine & Books. 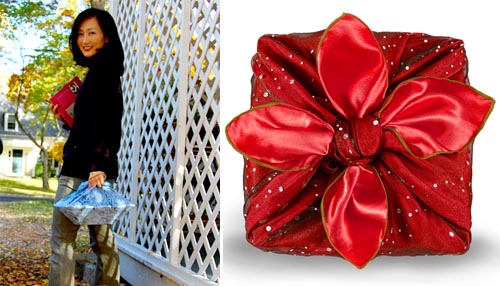 To make it easier for Americans to embrace this somewhat foreign cloth, Patricia Lee, above right, added some funky factors such as beads and fresh-looking prints to her bojagi wrap. Provided by Miriam Ri

As Lee makes a name for herself as a bojagi artist, her office grows even more packed with people eager to learn how to become bojagi wizards. Groups of foreign tourists - most Japanese - visit the master for advice. She has at least a dozen other professional interests, but Lee’s busy most days with bojagi.

One reason for that: she’s opening an academy in Japan to teach locals bojagi wrapping in the first half of this year. She also plans to take her show on the road, wrapping a Volkswagen Beetle with a huge bojagi in Hainan, China, early next month at the Boao Forum for Asia. The enormous piece of cloth was made from more than a hundred bojagi, the artist said.

“I understand young people won’t be interested in these things. I also preferred Hermes to hanbok when I was young,” Lee said. “But it’s versatile, simple and very Korean. It also saves you from using unnecessary wrapping materials. Most of all, it doesn’t take a lot of money, but it still looks pretty and cool.”

Meanwhile, across the Pacific, another woman has been enticed by these simple cloth wrappings: Patricia Lee, 39, also known as “the bojagi lady.”

Before last Christmas, the peak season for Americans splurging on wrapping paper, elaborate boxes, ribbons and cards, Patricia Lee was invited onto six different TV shows, including Good Morning America, where she demonstrated how to wrap gifts with bojagi after Amazon.com sold out of her bojagi book “The Wrapping Scarf Revolution” in just two weeks after its release.

The younger Lee calls it a “worthy challenge” to convince Americans to accept this new and foreign thing as earth-friendly.

One way she marketed bojagi to Americans was by adding bling: beads, spangles and bold colors and patterns. She also started calling them “bobo” instead of bojagi for easier pronunciation. And her tactics worked. In the U.S. alone, 60 stores sell Patricia’s diverse Bobo products, and her bojagi creations are available at shops in Canada and Japan.

After emigrating to the U.S. at age 5 and being raised in a big family that saw four generations living under the same roof, Lee said she grew up watching her grandmother and great grandmother wrap things in bojagi. But she had no interest in them back then.

“I thought it was unattractive and old-fashioned,” said Lee, now a mother of two sons living in Connecticut.

But Lee’s visit to Seoul when she was a college student in the 1990s changed the way she thought of bojagi.

Watching her aunt wrap a gift, Lee said, “I was amazed at how simple and beautifully efficient the wrapping was. In America, we hunt for wrapping paper, tape, ribbon and scissors, and then spend a lot of time cutting, folding, taping and then putting everything away again.

“I thought this was a wonderful way to wrap gifts and wondered why more people didn’t do this.”

The timing was perfect. Just as Americans began to discover reusable bags and bottles, Lee launched her Bobo Wrapping Scarf in 2008, and started to make attractive bojagi to appeal to Americans.

Her philosophy is simple: “I design things that I want to buy and use,” she said.

Looking at Patricia’s creations, it is hard to believe that they are still bojagi. Where Lee Hyo-jae’s bojagi still use traditional colors and patterns, Patricia Lee mixes and matches modern styles in innovative ways. One bojagi has black zebra patterns on one side and is solid dark pink on the other. Other patterns include polka dots, cheetah fur, flowers, cherries and bandana prints. Some of her bojagi are even crinkled.

As a fervent advocate of bojagi, Patricia carries at least one wherever she goes: at a potluck party to carry a bottle of wine or on a trip, to wrap up her clothes and lingerie.

To these two women, bojagi are no longer just for fashion-ignorant grannies but for everyone - especially those who care about the environment. But the modernization is a tough sell in some quarters.

“Bojagi were widely used back in the Joseon Dynasty, but nobody wrapped bojagi as some people do these days using elastic bands and wires,” said Kim Hyun-hee, a master craftswoman who has made traditional bojagi for the past 40 years.

Lee Hyo-jae and Patricia Lee both use elastic and bungee cords sometimes to hold bows or knots.

Answering her critics, Patricia Lee said, “I think Korean culture is the best kept secret in the world! The problem is that many wonderful aspects of Korean culture lack a certain degree of relevance.

“The ancient art of bojagi making and designing is wonderful, but how does it relate to you and me? My challenge is to make Korean culture interesting, fresh and relevant,” she said.