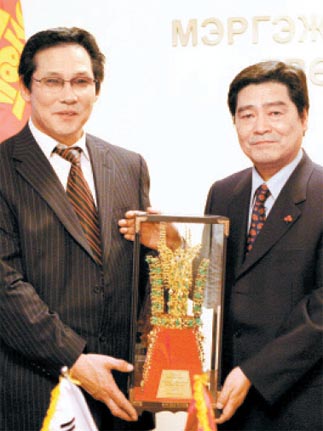 Kim Nam-deuk, president of KESI (right), delivers a present to Ts. Shiirevdamba of GASI, after signing an agreement for system and technology support.

The Korea Elevator Safety Institute (KESI) has hammered out a plan to export the world’s most advanced elevator safety technology and management systems to other countries as part of an effort to enhance diplomatic ties with other countries in the region and help local companies advance overseas. The institute has chosen to export its first safety systems to Mongolia, a country rich in natural resources. There are just 2,000 elevators in the country, which is a relatively small market. But it could help open the door to other countries in the region, including Russia. About 50 percent of the elevators in Mongolia were made by Korean firms.

Local companies were able to make inroads in Mongolia in part because the country’s Russian-made elevators were wearing down, spurring a need for new ones. Korean companies also presented localized elevators that are bigger than the previous ones, which could only hold a few people at most.

The institute’s president, Kim Nam-deuk, visited Mongolia in February 2009 for several days to promote technology exchange between the countries. During the trip, he signed an agreement with Ts. Shiirevdamba of the country’s General Agency for Specialized Inspection (GASI) to provide elevator system support and technology exchange. The two sides agreed to work on developing elevator safety standards for the country.

As part of the plan, KESI will initially support everything from elevator safety technology to management systems. It will also look to help the country train professional in elevator safety by offering education programs at Korea Lift College, which opened earlier this month.

Last year, KESI received financial support from the Korea International Cooperation Agency to send a specialist to Mongolia to implement an advanced elevator safety management system and to check the current status of old elevators in Ulan Bator.

To increase international cooperation in this area, KESI is also actively promoting exchange activities with Kazakhstan, Kyrgyzstan and Vietnam.
By Lee Ji-hyun [concordia@joongang.co.kr]