Ode on a Korean urn

Ode on a Korean urn 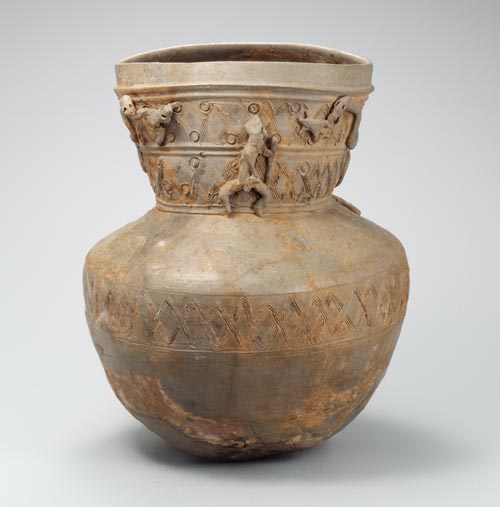 Although its upper and lower parts are slightly warped, this clay jar with figures in relief has a high historical value, in that its other parts remain intact.

The neck is decorated with twiddles and circles; figures in the shapes of a man, a snake and a frog stand out in relief over the patterns. The man is holding his penis with his right hand and a stick with his left. The snake is snapping at the hind leg of the frog.

The figures of human beings, animals - horses, pigs, tigers, snakes, birds, frogs, fish and crabs - and daily necessities show the religious beliefs and cultural values held by the people of the period. The images are of people dancing, singing, playing musical instruments and having sexual intercourse, which symbolize prayers for fecundity and fertility.

Later, as the kingdom of Unified Silla (668-935) developed, the figures that appeared on earthenware became more realistic and descriptive.


*The photos and text for Treasure Trove are provided by the National Museum of Korea. For more information, call (02) 2077-9000 or visit www.museum.go.kr