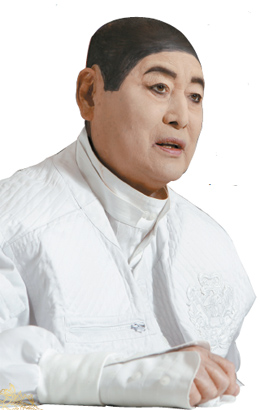 In Korea, you’d have to have been living under a rock not to have heard of Andre Kim, the Korean designer who has been an active, and colorful, figure in the industry for the past 48 years.

He is well known for what has become his signature style - a snow-white outfit and intense eye makeup - which turns heads wherever he goes.

“In the past, I used to wear business or dress suits in other colors just like other people, but I began dressing like this about 30 years ago. There was no specific reason for it - I’ve always liked the color white and this outfit was actually designed to conceal my physical flaws,” the 75-year-old designer said in a recent interview.

Kim is also known for his distinctive way of speaking, which is slow and tender and often punctuated with flowery adjectives such as “fantastic” and “dramatic” in English, and he is often mimicked by local entertainers.

But the fact is that Kim, who is considered Korea’s first male designer, is still going strong and holds about a dozen fashion shows a year. On Monday he concluded his most recent show in Beijing, held in commemoration of a major fashion event there, and returned to Seoul the next day.

The following are excerpts from the JoongAng Daily’s interview with Kim, conducted on Wednesday in his studio in Sinsa-dong, southern Seoul, which, like its creator, was dressed all in white.


Q. Your fashion shows are quite distinct from others in that they resemble a deliberately constructed drama, with actors performing your signature love scene at the end of each show. What are your intentions behind that?

A. For me, a fashion show is more than a place to present the clothes I make. I consider [fashion shows] an art form like other cultural performances such as opera. It is a venue where I can display my skills as an artist and realize my dreams. I also want my clothes to be considered art, rather than a product.

I hope that my shows will always be dramatic so that the audience can have a fantastic and touching experience seeing my show. In the end, I hope my shows touch people’s hearts.

Some of your critics say that your designs have always been the same and that the average person cannot really wear the clothes you make, which mainly include dresses and gowns. How would you respond to that?

The thing is that I’ve never created the same clothes. What has been unchanged in my designs through the years is the style, which represents me.

Let me put it this way. Picasso has his own style of painting, and Matisse has his own. When you look at a painting by Picasso, you instantly recognize that it is a Picasso. Same here - when people see the clothes I make, they can get the answer right away, which is also what I want.

As for whether the general public can wear my clothes, I plan to launch a line of casual wear for both men and women in the near future.

Your career spans nearly half a century. What made you enter a career as a fashion designer in the first place?

I was born in 1935, when Korea was still under Japanese colonial rule, and when I was young, the idea of “fashion” or a “designer” was totally unfamiliar to Koreans. To be a designer was something unimaginable at the time.

However, the arts, such as painting, music and poetry, have always enthralled me and when I was a junior high school student, I became interested in the clothes women wore and I used to draw sketches of my sisters wearing jeogori [the upper garment of traditional Korean clothes] and a seamless one-piece skirt, which were ordinary wear for women at the time.

The turning point was the Korean War [1950-1953], which broke out when I was 15 years old. I fled to Busan, where I first encountered foreign cultures, including European movies, which also opened my eyes to the world of fashion and design. While the reality was harsh at the time, artistic things also served as a sort of place of refuge for me, I think.

You have now branched out into diverse areas such as jewelry, lingerie, eyewear, china and even bicycles. How do you manage to do all those things, and what’s your secret for staying fit?

I cannot take charge of all those things - what I do is explain what my designs should be like to each licensed company and they prepare the products according to my design concept.

My secret for keeping fit? Although I don’t work out regularly, I think work keeps me healthy. The more I work, the healthier I feel. I usually work on weekends and holidays, except just twice a year - New Year’s Day and Chuseok.

I neither drink, nor smoke. I did try drinking and smoking once when I was young, both of which were not my thing. [Laughs.]

What are your future plans and are you planning to train somebody to be your successor?

Last year, I opened another atelier in Giheung, Gyeonggi, where I can hold outdoor fashion shows. There, nature, art and culture all merge together and you can feel the change in atmosphere according to the season. It is an ideal place for an outdoor fashion show and I actually plan to hold one this May.

As for the successor issue, I think it is meaningless to name a person to be my successor in this age of globalization. Nowadays, world-famous brands like Louis Vuitton, Gucci and Chanel maintain their reputations even though their original creators are gone. I hope the Andre Kim brand will go on like that and will live forever even after I’m gone.

However, I may be able to recruit some talent from home and abroad in the future to help continue my work. The nationality of the designer doesn’t matter as much as their talent. Look at Karl Lagerfeld - he is a famous designer from Germany and worked for the French brand Chanel as art director.

How do you want people to remember you as a designer, and as a person?

I’m always very proud of being Korean and being able to present the beauty of Korea through my pieces of fashion art. I want people to remember me as a designer who was born in Korea in times of difficulty, when fashion and design were foreign, and as a person who, through my designs, helped bring Korean fashion to the world while also drawing attention to the idea that fashion is a form of art.