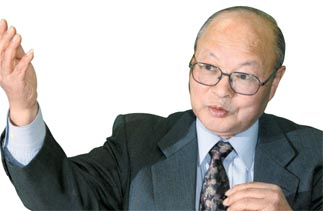 Ieji Sato, a 74-year-old Japanese man, had a 35-year career as a public servant with the Hiramachi city government in Fukushima, Japan. For almost as long, he has been a devoted fan of traditional Korean culture. Now that he has retired, he has made it his mission to foster cultural exchange between the two countries, and his first project will bring Korean folk singer Park Ae-ri and the Mira Dance Company to Fukushima, Japan, for two performances in June.

The retired public servant first found himself drawn to traditional Korean performance back in 1988 when he first visited Seoul to promote government-civilian cultural exchanges between Fukushima and Seoul during the 1988 Seoul Olympics.

“Before coming to Seoul, the only thing I knew about Korea was that it was near Japan,” Sato said. “But when I listened to Korean traditional folk songs such as ‘Arirang’ and ‘Doraji Taryeong,’ they tugged at my heartstrings. It struck me there was something special about these songs and I wanted to find out more about them.”

So he threw himself into a study of Korean history.

“I learned that the legal system and Buddhist sculptures from Korea’s Baekje Kingdom [18 B.C.-660] played a large role in helping Japan develop,” Sato said. “In Fukushima, there’s a popular folk dance called the jangara, and the movement of the jangara dancers is quite similar to that of Korea’s nongak [Korean traditional farmer’s music] performers. I guess that serves as evidence that Korean traditional culture was imported to Japan a long time ago.”

Last year, Sato visited Seoul to see a performance of traditional Korean dance by the Mira Dance Company at the Sejong Center for the Performing Arts in central Seoul.

“I have visited Korea many times, but truth be told, I didn’t know that much about traditional Korean dance,” Sato said. “The movement of Korean traditional dancers was special to me because the dancers were simultaneously elegant and energetic.”

When Sato returned to Japan, he met with the governor of the Fukushima Prefectural Government to discuss inviting performers of traditional Korean music and dance to the region. Sato then helped create a nonprofit organization with nine organizations, including the Fukushima Prefectural Government, local businesses and the media. The organization’s mission is to foster cultural exchange between Korea and Japan, and the performance in June will be their first presentation.

“Nine influential groups are working together on this project, and that means a lot because it reflects their dedication to increasing cultural exchange between the two countries and shows that the project isn’t just a one-time event,” Sato said. “I’m hoping that someday Koreans will also have a chance to see the traditional culture of Fukushima, too. I hope to extend the scope of exchange between the countries to include sports, including golf and soccer, in the near future.”

When asked why he is doing so much work for so little financial gain, Sato said, “I like Korea. That’s all.”

“My whole family including my son, my daughter-in-law and my grandchildren are all studying the Korean language,” Sato said. “And I’ve heard that even an elderly man can live like a young one when he studies and works his entire life. I want to live like a young man for a long time.”