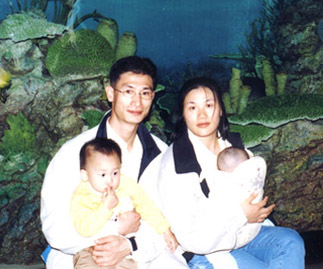 The second seaman pulled from the wreckage of the sunken warship Cheonan was a true sailor who devoted himself to the country as well as the Navy during his 18 years of service, military officials said Wednesday.

Senior Chief Petty Officer Kim Tae-seok, 37, was a model officer who received several citations and had a nearly unblemished record, the Navy said.

Kim came to the corps from a Navy family. His oldest brother, Kim Tae-won, 45, is a retired lieutenant junior grade. The former deputy commander of a Chamsuri-class patrol ship joined the force in 1988 and retired in 1991.

Since the sinking, he has acted as a representative of the relatives of the 44 missing crew members. Kim Tae-won has visited the site of the rescue operations, and played a pivotal role in persuading the families to ask the military to change the focus of its mission from rescue to salvage after a diver died in an attempt to locate survivors.

Of the 104 sailors aboard the Cheonan, 58 were rescued and 44 have not been found. The body of Senior Chief Petty Officer Nam Ki-hoon was recovered inside the petty officers’ mess hall in the stern of the vessel last Saturday.

The 1,200-ton corvette broke in two and sank after an unexplained explosion on the night of March 26 near the western maritime border with North Korea in the Yellow Sea.

Kim Tae-won said his younger brothers followed him into the Navy after he became an officer. The second brother, Kim Tae-kyun, was an enlisted seaman. Kim Tae-seok’s brother-in-law Lee Yong-ki, 36, also joined the Navy in 1995 and served in destroyers and Chamsuri boats until 2003.

“He was very kind and a great soldier who cared for his fellow crew so much,” Lee said. “He was also a good father who took good care of his children.”

Kim is survived by his wife, Lee Su-jeong, and three young daughters, aged 8, 7 and 5. His wife said when she heard that a second body had been found, she didn’t want to believe it could be her husband. But she said that although heartbroken, she is grateful that his body was recovered.

Kim was commissioned as a Navy petty officer first class in August 1993, and began service aboard the Cheonan last April. He had been slated for promotion and was raised to his last rank posthumously. The Navy made an exception of a rule that withholds promotions from missing servicemen.