Where to celebrate Seoul’s long-awaited spring

Where to celebrate Seoul’s long-awaited spring

It’s natural to think of Seoul as simply a huge urban sprawl, with lots to do in art, food, and shopping but little for nature lovers. Yet Seoul has more green spots than you might think. Since Mother Nature is finally begrudging us spring weather, now would be a great time to learn more about the parks around the capital.

There are over a hundred parks listed on the city’s parks Web site — far too many to cover in detail in this article. Instead, we’ll take a look at a few major facilities in different areas around Seoul. To find all the parks in your area, visit parks.seoul.go.kr/park.

North of the River 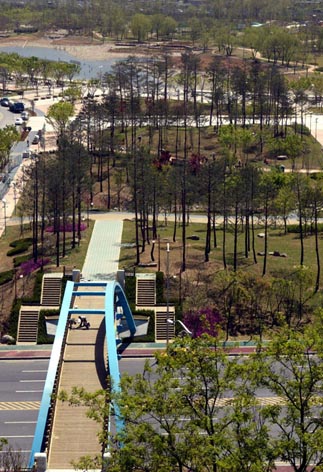 Located on Nanji Island, World Cup Stadium Park opened in 2002. It was actually created from a landfill that contained 92 million tons of garbage, and its transformation is a testament to new policies focused on making Seoul more eco-friendly. In fact, the Seoul Metropolitan Government plans to open a hydrogen fuel cell power plant near the park this May, adding to its green cred. The park itself is actually a composite of several: Pyeonghwa (Peace) Park, Haneul (Sky) Park, Noeul (Sunset) Park, Nanji Stream and Nanji Hangang Park, each of which has its own special characteristics.

Pyeonghwa Park was built around the theme of “mutual coexistence” and contains Unicef Plaza, Nanji Pond, Peace Garden, and Himang (Hope) Forest. Haneul Park sits atop a hill on the highest point of World Cup Park, which affords beautiful views of the city and the Han River. When winds sweep across its reed-covered grounds, the idyllic scenery rustles photogenically. The park itself is entirely self-sufficient, with wind power generators installed on the grounds producing all the energy for its lights and facilities. Noeul Park, as you might guess from its name, is an excellent place to go during dusk hours — the sunset views there can be quite stunning. For golf lovers, Noeul has a nine-hole course, while Nanji Stream Park features its namesake waterway as well as an outdoor stage for performances and some sports facilities. Nanji Hangang Park, which sits on the bank of the Han, also houses sports facilities, such as basketball courts and soccer fields, as well as a port for Han River cruise ships. Haneul and Noeul parks close in the evening hours, but the rest of the area is accessible 24 hours a day. World Cup Park is near World Cup Stadium Station, line No. 6, exit 1.

This year marks the 100th anniversary of the start of Japanese colonial rule over Korea in 1910, and Seodaemun Independence Park was created to honor all those who fought for Korea’s independence. Dongnimmun Gate, whose name means “independence” is a major feature of the park, even more accessible to visitors since last year’s renovations. The gate was built in 1897 after Korea’s tributary relationship with China ended.

Nearby Independence Hall, once a hall to entertain Chinese emissaries, became a symbol of Korea’s national sovereignty. It was later torn down with great ceremony by the Japanese during their occupation of Korea. Since rebuilt, the hall now contains enshrined tablets with the names of over 3,000 Koreans who gave their lives to fight the Japanese occupation.

The park houses the equally worthwhile Seodaemun Prison History Hall, located in the actual prison built by the Japanese to hold Korean independence fighters, providing a sobering reminder of the brutal oppression of those who opposed Japan’s rule. Seodaemun Prison History Hall opens at 9:30 a.m. daily all year round, and closes at 5 p.m. from November to February or 6 p.m. the rest of the year. Admission is 1,500 won. Seodaemun Independence Park is located near Dongnimmun Station, line No. 3, exit 4 or 5.

Set aside an afternoon for this park, which is next door to N Seoul Tower, the Myeong-dong cable car, Martyr Ahn Junggeun Memorial Hall, the Namsan Public Library, the National Theater and the Namsangol Traditional Hanok Village. A trip to the top of N Seoul Tower affords you a 360-degree view of the city. The hall devoted to Ahn commemorates the revolutionary who assassinated the former Japanese Prime Minister Ito Hirobumi in the name of Korean independence and was later executed for his crime.

A cultural highlight, Namsangol Traditional Hanok Village is a slice of traditional Korea in the midst of the big city, with five restored hanok houses are available for tour, plus activities such as traditional seesaws and arrow throwing. At the park itself, there is a mineral spring from which some people carry huge jugs of water back home, an acupressure walk, a wildlife flower park, and the Namsan Botanical Gardens. It also seems to be a popular spot for dog owners, with its long, varied trails. The park also has numerous sports facilities, such as a swimming pool, badminton court, tennis court, archery round, baseball stadium, ping-pong tables and places to roller skate. At this time of year, the park is especially beautiful, as the cherry trees are blossoming. Namsan Park can be reached by bus or on foot from Noksapyeong Station (line No. 6), Hangangjin Station (line No. 6), Hoehyeon Station (line No. 4) or Dongguk University Station (line No. 3). For the cable car, use Myeongdong Station, line No. 4, exits 3 or 4.

What began as a simple expansion of Ttukseom Sports Park soon became much more — the domed stadium and cultural town originally planned were scrapped when surveys revealed the public preferred something more like the beautiful park we have today.

The huge project started in mid-2004, and Seoul Forest opened to the public one year later in June 2005. It’s home to 100 different varieties of animals and features a whopping 400,000 trees. Over 48,000 of those trees were planted by citizens themselves during events before the reopening.

The forest is organized into five different areas: the Cultural Art Park, the Ecological Forest, the Nature Experience Center, the Wetlands Ecological Field and the Han River Waterside Park. The Cultural Art Park features a fountain for kids to play in, an outdoor stage, a wooden playground, a water playground, a disabled-friendly playground and various libraries. Both the Mirror Lake and the Forest Path are also worthwhile.

At the Ecological Forest, people can view animals in their own habitats from a suspension bridge, or even feed the Manchurian sika deer that live in the park at a special weekly event. The Nature Experience Center features an insect and botanical garden, plus rotating programs to help students learn more about insects, ecosystems and environmental issues.

The Wetlands Ecological Field features a Marsh Plants Garden and bird observatory. It also has an eco-playground with equipment made from recycled materials. Finally, the Han River Waterside Park gives visitors plenty of opportunity for recreational sports, such as biking, windsurfing, water skiing, and ski boat rides. It also includes the Seoul Forest Wharf, where you can take a boat around Seoul Forest for one hour, or go to other destinations, such as Yeouido or Jamsil. Seoul Forest is located near Ttukseom Station, line No. 2, exit 8.

South of the River 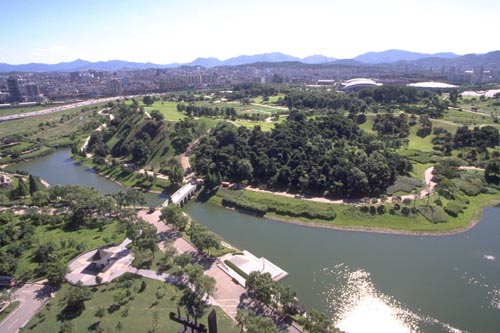 Sometimes when cities host the Olympics, the stadiums that are left behind become empty, unused shells. Seoul, on the other hand, has made great use of its facilities since it hosted the Olympics in 1988. Spanning 1.4 million square meters, the park has something for everyone. Visitors will be greeted first by the impressive Peace Gate, designed to embody the spirit of international peace and love that the Olympic Games represent.

For sports lovers, there’s an Olympic museum, with three exhibit halls. As you might guess, sports facilities are also in no short supply — there’s an Olympic-sized swimming pool, tennis courts and three different gymnasiums. Many visitors come to bicycle or skate along the park’s paths.

For art lovers, over 200 large scale sculptures can be found throughout the park. Meanwhile, the Soma Museum of Art provides another place to view various exhibitions. For history lovers, try the Mongchontoseong Promenade, which will lead you around to two historical sites from the Baekjae period (18 B.C. — A.D. 660), Mongchon Fortress and Mongchon moat.