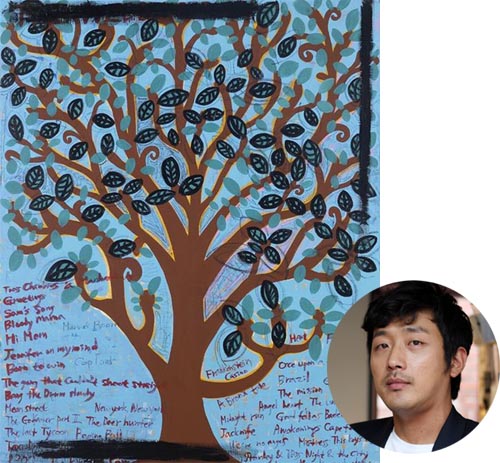 Actor Ha Jung-woo’s paintings are said be reminiscent of those of U.S. artist Jean-Michel Basquiat.

A group of celebrities will get together today to show their skills - not as actors or performers, but as visual artists.

They join a group of over 200 artists exhibiting 5,500 artworks as part of the fifth annual Seoul Open Art Fair at COEX in Samseong-dong, southern Seoul.

The singer 100Ga, a member of the dance trio Koyote, even opened his own studio and regularly does photo shoots for his fellow performers, a group that includes Lee Pa-ni, who became the first Playboy model from Korea in 2006. When Lee made her debut as a singer in 2008, 100Ga took the photos for her album.

Another of 100Ga’s celebrity clients is the Korean singer and actor Rain, which 100Ga revealed on a recent TV show.

100Ga had his first solo exhibition in May last year at a gallery in Cheongdam-dong, southern Seoul.

Ha, who has appeared in hit films such as “Take Off” (2009) and “The Chaser” (2008), is also known for his work as a painter. The 32-year-old had his first solo exhibition last month in Yangpyeong, Gyeonggi. Critics have said his paintings are reminiscent of those by U.S. artist Jean-Michel Basquiat.

“This is a different way of expressing myself off screen,” Ha told reporters on the opening day of his solo exhibition. 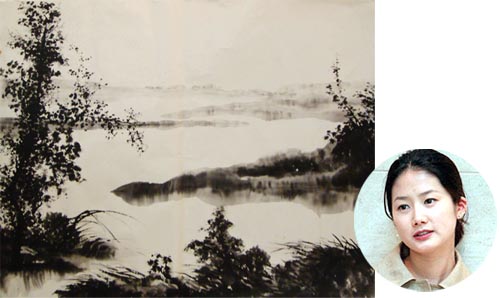 Shim Eun-ha, who starred in many hit movies in the 1990s but retired from film in 2001, showed her ink-and-wash paintings last year. [JoongAng Ilbo]

The teenage actress Ko, who recently appeared on the TV drama “Masters of the Art of Study” and the 2006 film “The Host,” will exhibit three photos at the fair.

She will also display other photos, many of which are images from her personal life, at the Cine 21 Photo Exhibition, which runs from this Saturday to May 1 at Gallery LF in Sinsa-dong, southern Seoul.

Actor Um Tae-woong is also well known for his love of photography. Um, who recently appeared in the hit TV drama “Queen Seondeok,” started out by taking pictures of his fellow actors between scenes and uploading them to his Web site.

Pop artist Nancy Lang also loves to carry a camera and camcorder wherever she goes. She is often seen holding a small camcorder or a camera when she shoots TV shows.

The fair is a major event in Korea and includes the participation of 80 Korean galleries and art professionals from Korea and abroad. But organizers wanted to add a new element to the program.

“I wanted to do something other than exhibit the works of professional artists,” said Jeong Jong-hyun, the director of the fair. “So we decided to invite celebrities who have been making a name for themselves in the art world to participate in the fair via the Star Art Project.”

The project was launched last year as an outlet for the works of celebrities who are also visual artists.

Last year, it drew the participation of celebrities including Kim Hye-soo, who has starred in many hit TV dramas and films including “Style” (2009) and “The War of Flower” (2006). Kim taught herself to paint and, discussing her work on a local TV show, she described the act of painting as a moment when she enters a world of her own.

Shim Eun-ha, who had a burgeoning career as an actress but retired from film in 2001, displayed delicate ink-and-wash paintings through the SOAF last year.

A percentage of the proceeds from this year’s art fair will be used to help young patients suffering from a congenital muscle disease who are hospitalized at Gangnam Severance Hospital.

The Seoul Open Art Fair kicks off today and runs through next Monday at COEX B Hall in Samseong-dong, southern Seoul. A variety of artworks including paintings, photographs and sculptures will be on sale throughout the duration of the show. The fair is open from 11 a.m. to 8 p.m. daily. For more information, visit www.soaf.co.kr or call (02) 545-3314.