A dark omen settles over Korea

A dark omen settles over Korea 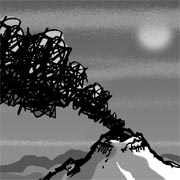 One day of sunshine can make a big difference in May and June. It’s time for farmers to finish planting the rice, and for rice plants to grow quickly. Around this time, the amount of sunshine is no less important for plants than the nutrients they get from the soil.

If, however, they do not get enough sunshine, their leaves get long and thin, and their chlorophyll levels and cellular tissue mass decrease, along with the plant’s ability to photosynthesize. Consequently, there are empty heads of grain and the crop goes bad.

And that is how a day can make a difference in the life of a plant.

Changes in the amount of sunshine were said to be the direct cause of the extinction of the dinosaur. A study conducted by a group of international specialists including 41 geologists and paleontologists says that the dinosaur era ended when an asteroid 10 kilometers (6.2 miles) in diameter landed on the Yucatan Peninsula in Mexico some 65 million years ago. Although all living things within a 1,500-kilometer radius perished due to the enormous earthquake and tsunami caused by the collision, the biggest disaster was that the Earth had to go through a prolonged period of winter because dust and sulfurous elements created by the impact blocked out light. About two-thirds of animals and plants on Earth ultimately disappeared due to a severe shortage of sunshine. The study was published in the March edition of the journal “Science.”

When Mount Pinatubo, an active volcano in the Philippines, erupted in 1991, some 20 million tons of sulfur dioxide soared up to the stratosphere some 40 kilometers above the ground. The fine particles of smoke and fog wrapped around the Earth and blocked the sun. For a year after that, the average temperature was 0.58 degrees Celsius lower than it had been in the 10 preceding years. That, too, was a consequence of the decrease in the amount of sunshine.

And in order to stop global warming, some scientists now study the possibility of shooting into the stratosphere a material that will artificially reflect the radiant energy of the sun.

This year, spring is missing in Korea. We had snow in April and farmers’ agony deepened. The problem was the lack of sunshine. In Seoul, the total amount of sunshine received in March was only 68 percent that of a normal year. Therefore, it is said the government will provide a total of 346.7 billion won ($312.9 million) to supplement the damages incurred by the rural households, recognizing that the lack of sunshine is a natural disaster.

Meanwhile, it is said that the cloud of ash from an Icelandic volcano will threaten our skies this weekend. The ash has already grounded airplanes bound for Europe for the last week. Although it will not affect Korea much, I still worry that it will further diminish our already insufficient supply of sunshine and cast another long shadow over the Korean Peninsula.