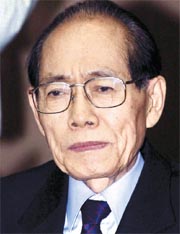 After the arrest of two North Korean agents sent to assassinate top defector Hwang Jang-yop, investigators are trying to identify their South Korean contacts, the prosecution and the National Intelligence Service said yesterday.

According to the Seoul Central District Prosecutors’ Office and the intelligence service, arrested agents Kim Myong-ho and Dong Myong-gwan have told authorities during interrogation that they were supposed to be helped by sympathizers in the South.

The agents were to report Hwang’s whereabouts to the North and receive specific directives for his assassination, the authorities said.

Hwang, the 87-year-old former secretary of the North’s Worker’s Party, defected to the South in February 1997. The architect of the North’s juche ideology of self-reliance, Hwang has faced numerous assassination threats including those from pro-Pyongyang groups in the South.

Hwang reacted calmly to the news reports about the arrest of his assassins, his close aide said yesterday. “Death is just death. There is no difference from dying of old age or being killed by Kim Jong-il,” Hwang was quoted as saying by Hong Sun-gyeong, head of the Association of North Korean Defectors.

“My wish is for North Korea’s democratization, and it will be an honor for me to be killed by agents if it reveals the truth about Kim Jong-il,” Hwang also said.

Surrounded by a beefed-up police security detail, Hwang gave a philosophical lecture to his aides in his office yesterday. Since his defection, Hwang has been guarded by a team of 20 bodyguards around the clock.

Following the announcement of the assassins’ arrest on Tuesday, more details about the agents’ mission and training were revealed yesterday. The authorities said the two men were selected to serve as combat agents of the reconnaissance bureau at the Ministry of the People’s Armed Forces in 1992. Although they received intensive training in assassination and terrorism for 18 years, South Korean authorities believe it would have been difficult for them to carry out a mission in the South without local support, especially since they arrived from Thailand without any money or communication devices.

The suspects confessed their identities and missions, but refused to speak about their South Korean contacts, sources said.

Intelligence sources said North Korea continues to contact spies in the South, and Hwang once estimated there are about 50,000 resident spies here.

According to investigators, Kim and Dong prepared for the mission for four years by adopting identities as defectors. During the clandestine training, the two were trained in shooting and learned some English and about South Korean culture.

In November last year, they received an order directly from the bureau’s chief, Col. Gen. Kim Yong-chol, to “cut the throat of Hwang.”

Their fake identities, however, were revealed during intensive questioning by the South Korean authorities.

Kim was sent to the South in January this year and Dong the next month, although the authorities only announced the arrests Tuesday.

The interview process has been strengthened since a North Korean female spy was arrested in 2008 after entering and living in the South through posing as a defector.

As of this month, 18,638 North Korean defectors have settled in the South.

Hwang’s criticism of the North’s leadership has become harsher lately.

In an interview with Japan’s Asahi Shimbun on April 8, Hwang said: “North Korea calls me a traitor, but the real traitor is Kim Jong-il, who is starving his people to death.”