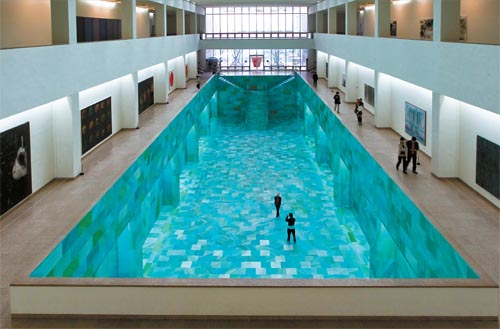 “Thursday I go waltzing to the zoo ... Fridays I go painting in the Louvre,” Freddie Mercury sang. If he were alive today, and could accept Korea’s National Museum of Contemporary Art instead of the jewel of Paris, Mercury could do both in one day.

One of MOCA’s neighbors is the Seoul Zoo in Gwacheon, Gyeonggi.

And it’s the perfect season for a visit, with the cherry trees around the museum at their peak of their beauty since beginning to bloom early this week, about 10 days later than they did last year.

But the museum’s blossoms aren’t all natural. At the main gate of the museum, a 4.7-meter (15-foot) high “Super Flower” made by installation artist Choi Jeong-hwa in 1995 looms over visitors like something out of “Little Shop of Horrors.” The exaggerated scale of Choi’s work, he wrote in the exhibit notes, gently satirizes materialism and consumption. 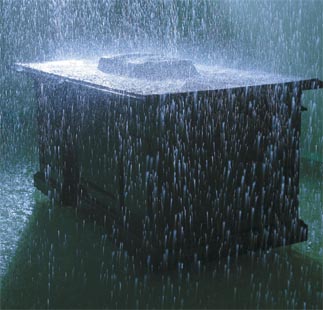 “Extra Ordinary Late Summer” (1998), an installation featuring a wooden desk and water by Rhee Ki-bong, is part of the “30th Anniversary of Young Korean Artists” exhibition at the National Museum of Contemporary Art. Provided by the museum

Super Flower is part of the “30th Anniversary of Young Korean Artists” exhibition, a fascinating overview of the biannual “Young Artists” exhibition that MOCA has put on since 1981, providing up-and-coming Koreans with a chance to show off their artistic experiments to the public.

“The 327 artists that the exhibition has featured for the last 30 years are now pillars of Korean contemporary art,” said Lee Chu-young, a curator at the museum. He pointed out that many among them, such as Choi, Lee Bul and Suh Do-ho, who are all installation artists, and the photographer Koo Bohn-chang, have gone on to international renown.

This year’s event, spread across the 1st and 7th Exhibition Halls at the museum, includes work by 43 of these one-time “Young Artists,” offering a compact look at the progression of Korean contemporary art over the decades.

In the 1st Exhibition Hall are works that appeared during the 1980s, with some replicas created more recently by the original artists. 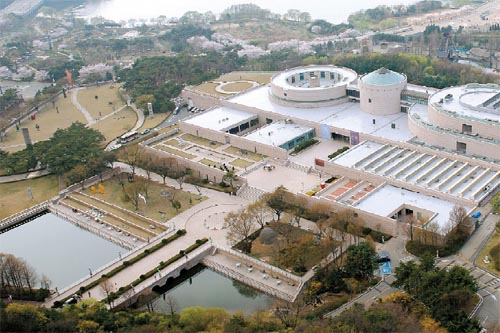 The cherry trees that surround the museum begin to blossom. Provided by the museum

The works vary in genre, media and theme, but most reflect the two dilemmas facing young artists at the time: whether to express a political message through one’s art, and how to deal with art buyers.

As one of the artists participating, Oh Sang-gil, born in 1957, explained, “In the 1980s, graduates from art colleges felt pressure to choose one of two art styles: minimalist art from the West without political overtones and ‘people’s art’,” mainly realistic or traditional paintings that protested against the military regimes of the 1970s and ’80s.

“In this situation, some artists, like me, sought a third way, acting in small, flexible groups,” he said.

Oh’s installation on display, a giant circle made of, among other materials, bricks ground to powder and dyed blue, is meant to be temporary and eventually returned to nature, he explained. The artist created a replica of the original for the exhibit, explaining that he believes art should exist in the memory rather than be physically owned. 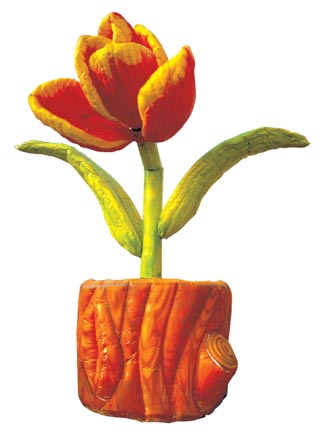 They include “In the Beginning” (1994), which is a series of black-and-white photographs depicting human bodies struggling under pressure by Koo Bohn-chang (born 1953).

The other special exhibition now taking place at MOCA is a solo show by Park Ki-won, who has been designated the museum’s “Artist of the Year 2010.” Three large installation works occupy the space, “Airwall” and “Dim” in the 2nd Exhibition Hall and “Scenery” in the Central Hall.

With “Scenery,” Park has covered the entire 2,000-square-meter (21,530-square-foot) space of the Central Hall’s first floor with vinyl sheets, on which he painted in variations of a jade color for two months.

The viewers have to wear socks or special overshoes when entering the hall to protect the art. The added hygiene measures are meant to encourage viewers to sit and even lay down on the floor, surrounded by bursts of blue-green color, without concerns about dust.

It’s aimed at providing a restful experience, the artist said in a press meeting early this month.

“I hope that people will feel the work with all the senses available, body and soul. And I hope they will rest their minds and bodies here,” Park said.

“I have chosen the jade color because I like it and because it can bring about relatively subtle changes in the atmosphere of the space,” he continued. “I intend to see what reactions small changes can cause in viewers.”

“The title became famous in the world of art when Barnett Newman, who contributed a great deal to the rise of minimalist art in the 1960s, focusing on purer forms and viewer participation, used the title, ‘Who’s Afraid of Red, Yellow and Blue?’ for a painting in 1966,” the museum said in a statement.

“Who’s Afraid of Museums? contains the artist’s intention to change the museum space and guide visitors to a new, freer artistic experience,” the statement read.

*From Seoul Grand Park Station on subway line No. 4, take a free shuttle bus, which runs every 20 minutes, or walk about 15 to 20 minutes to the museum.