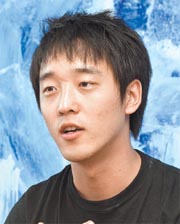 A 24-year-old law student won a lengthy legal battle against a Protestant high school and Seoul’s education authorities yesterday when the Supreme Court ruled that students’ religious freedoms must be respected even at private mission schools.

The Supreme Court ruled in favor of Kang Ui-seok’s argument that his religious freedom had been violated by the Daekwang High School’s policy requiring students to attend a Protestant religion class as a part of its curriculum regardless of their religious beliefs. The court sent the case back to the Seoul High Court for a retrial, overturning an appeals court’s decision.

The court ruled that the Daekwang’s policy failed to respect the students’ basic rights because they were assigned to the school through a random lottery, and didn’t choose it on their own.

Kang’s six-year battle began in 2004 after Daekwang expelled him during his senior year for staging protests against the religion class requirement. He filed a lawsuit and won a reinstatement the following year.

Kang then filed a civil suit against the school and the Seoul Metropolitan Office of Education, claiming that his religious freedom had been infringed and he had suffered emotional pain from the expulsion. Kang argued that because he was assigned to attend the Christian missionary school through a random draw, the school religion class requirement violated his rights.

Kang won the initial trial, and the Seoul Central District Court ordered the school to pay him 15 million won ($13,500) in compensation. He lost an appeal before the Seoul High Court.

The appeals court said that although it was illegal for a Christian school to force its students to follow a religious curriculum, Kang didn’t disagree with the policy during his first two years, so it was hard to say that he was forced to attend the class.

“The Daekwang High School did not establish any alternative class nor obtain permission from students,” the Supreme Court said in its ruling. “Therefore the school’s religious education has gone beyond Korean society’s healthy common sense.”

The court said Kang went too far and prompted the school to expel him, but Kang’s motives had been spurred by the school’s illegal policy.

“It took a long time to win this battle,” said Kang, who studies law in his junior year at Seoul National University. “There are still students suffering from forced religious education. I hope my case will serve as a lesson to end the practice. All I wanted was an environment in which students will have choice and religious freedom,” he said.

If Kang is awarded compensation after the retrial, he’s decided on a Christian way of disposing of it.

“I will return all the compensation to the school, based on the lesson of ‘love your enemies’,” Kang said.