A landmark of Christianity and freedom

A landmark of Christianity and freedom

Seungdong Church as it appears today. Above left: The church on Feb. 16, 1913. [JoongAng Ilbo]

In an alleyway off Insa-dong, a modern building stands tall, clashing with the modest, old-fashioned architecture for which the area is known. This is the Seungdong Presbyterian Church, and it’s actually just as historic as its neighbors. Dating back to 1893, this piece of Korean Christian history has been designated Tangible Cultural Property No. 130 by the Seoul Metropolitan Government. The interior has maintained much of its original look.

A timeworn memorial to the March 1 Independence Movement welcomes visitors to the church, which 118 years ago was established under the name Gondanggol. It’s the second-oldest Christian house of worship in Korea after Saemunan Church.

A plaque near the church commemorates its place in the history of the March 1 Independence Movement.By Shin Dong-yeun

Gondanggol Church was established by an American missionary, Samuel Moore, in 1893, but it had fallen into disrepair by 1913, when a new congregation took over and renamed it Seungdong.

The church has a dramatic history. In 1892, a man named Park, who was a baekjeong, or “untouchable,” fell ill with typhoid fever. A doctor named Avison, who was working at Jaejungwon, Korea’s first hospital, visited him at home with Pastor Moore. As Avison was King Gojong’s personal doctor, his visiting a baekjeong’s house was a shock to Park, and it touched his heart. Back then, baekjeong weren’t allowed family registration and had to live in ghettos. 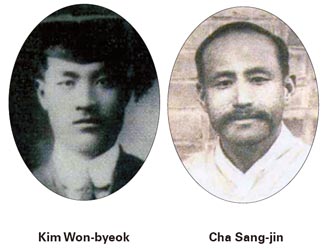 Inspired by Avison’s kindness, Park started attending Gondanggol Church as soon as he recovered. This displeased the church’s noble yangban members, and they demanded Park be expelled or at least forced to sit in the back. Despite the controversy, Moore said there would be no class discrimination in his church. When Park was baptized shortly after, the yangban stormed out and formed their own church at one of the congregants’ home. They had no pastor or deacons.

Naturally, after that Gondanggol Church filled with baekjeong. Thanks to Park and Moore’s proselytizing, they had a registered congregation of 57. Park petitioned the government for the abolition of the caste system and for the rights of the baekjeong to wear traditional gat hats, previously limited by law to yangban. Surprisingly, the petition was granted. That was the beginning of the Gabo Reform of 1894. Baekjeong were said to be so happy they even wore the hats to bed. Witnessing the event, Moore wrote that he felt he understood how American slaves must have felt hearing Abraham Lincoln’s Emancipation Proclamation for the first time.

“The end of the caste system is approaching,” Park wrote to the baekjeong who were living in the countryside. “This great blessing came from Gondanggol Church. Now, don’t become too excited and clash with yangban or commoners.” Moore joined in and wrote 360 copies of the declaration, which he had distributed across the country at his own expense.

Then one day, Park told Moore, “Pastor, I want to bring Christianity to all 30,000 baekjeong in this country.”

Although the Gabo Reform had been followed by other policies, it was proving hard to break old customs. Park and Moore set out on a mission to spread God’s word to the baekjeong. In one hand, they held the “Baekjeong Emancipation Declaration” and in the other, the Bible. When Park preached, he was said to have resembled Moses, the prophet who led the Hebrew people out of Egypt.

Park’s efforts seemed unstoppable. He went from one town to the next, baptizing baekjeong. He contributed to a newspaper and made speeches. He helped free baekjeong who had been imprisoned unfairly.

In 1898, however, a fire destroyed the Gondanggol Church, and by that time, the yangban had accepted the baekjeong and allowed them to join Hongmun-dong Church. The chapel was then moved to Jaejungwon, and then to the current Seungdong Church location in Insa-dong.

The new church later became a major center of the March 1 Independence Movement against Japanese imperialism. It was in the basement of the church that college student leaders met on Feb. 28, 1919 to prepare for the reading of the Korean Declaration of Independence. That basement meeting hall still exists today.

The Korean YWCA was founded at Seungdong Church as well, giving it a special place in the history of the Korean women’s movement and social activism.

Recently, some Christians and non-Christians have criticized Korean churches on news programs each time one of them decides to spend a jaw-dropping amount of money to renovate a building.

Park Sang-hun, 56, current pastor in charge of Seungdong Presbyterian Church, is one of those critics, preaching, “The teachings of Jesus should shine, not the name of the church. One single member of the congregation inside the church is more valuable than the grandest exterior.”