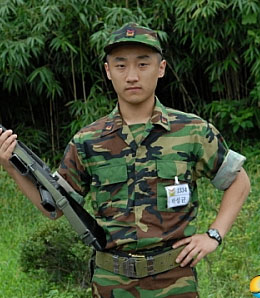 South Korea lifted the remaining half of a sunken naval ship Saturday and recovered the body of a missing sailor trapped inside, raising hopes that others would be found in the wreckage that is also expected to offer clues into the deadly sinking.

The body, identified as petty officer first class Park Sung-kyun, 20, brought to 40 the number of sailors confirmed killed in the March 26 sinking of the 1,200-ton patrol ship Cheonan near the Yellow Sea border with North Korea. Six other sailors are still missing.

Salvage workers found the body in the ship's bow after a crane raised the wreckage from the sea. The wreck was later placed on a barge, and naval rescue workers combed it for other missing sailors as investigators sought clues as to what tore the vessel apart.

Part of the ship's bottom appeared to have been blown off diagonally, suggesting a powerful external shock rocked the vessel. The ship's radar mast was also gone.

The rear half of the ship was pulled from the site last week. After an initial examination of the wreckage, investigators said an unidentified "external explosion" was the most likely cause behind the sinking. That assessment strongly bolstered suspicions of North

Korea's involvement, possibly in a torpedo or sea mine attack.

The site is near where the two Koreas fought bloody skirmishes in 1999, 2002 and last November.

North Korea rejected allegations of its involvement as a fabrication.

Examining both of the broken-off sides of the ship could provide more clues into the disaster.

In an effort to improve the transparency of the probe, South Korea has asked foreign countries to send experts to conduct joint research. Specialists from the United States and Australia have already been working in South Korea, and Sweden and Britain also pledged to send experts.

North Korea's involvement, if confirmed, would deal a serious blow to the already troubled relations between the two divided states and cast a pall over international efforts to reopen long-stalled disarmament talks on Pyongyang's nuclear arms programs.
South Korean President Lee Myung-bak has vowed to discover the cause of the sinking, respond sternly according to the investigation's results, and make South Korea's armed forces stronger, though he cautioned against rushing hastily to a conclusion without clear evidence.
On Friday, North Korea accused the South of trying to link the regime to the sinking and making the situation on the divided peninsula reach

"such extreme phase that it is at the crossroads of a war or peace."

U.S. Secretary of State Hillary Clinton warned the North against any provocations.

"I hope that there is no talk of war, there is no action or miscalculation that could provoke a response that might lead to conflict,"

In New York, the U.S. representative for North Korea policy, Stephen Bosworth, said he is still optimistic on the reopening of the North Korea nuclear talks despite the ship sinking.

"As we look ahead today, we of course face a set of uncertainties in the short-term as we await the results of the investigation of the sinking of the South Korean naval vessel," Bosworth told a seminar in New York.

"But looking beyond that I think that there is reason to believe that multilateral engagement remains the essential condition for making progress on greater stability, denuclearization, peace and prosperity on the Korean peninsula," he said. [Yonhap]