Last time, General Paik related the final recapture of Seoul in March 1951, and the sad state of the city after the ravages of almost a full year of war. 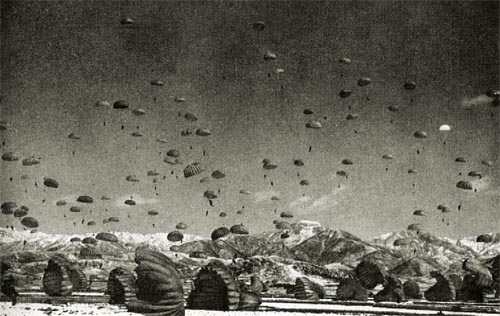 A total of 3,447 soldiers of the U.S. 187th Airborne Regimental Combat Team dropped from 135 transport planes in the sky above Munsan on March 23, 1951. Provided by General Paik Sun-yup

Four days after the recapture of Seoul, General Douglas MacArthur paid a visit to Seoul. His jeep arrived at my headquarters, with him sitting in the front seat and General Ridgway and Major General Markett, chief of the Economic and Scientific Section, riding in the backseat. MacArthur remained seated in the jeep as I briefed him on the current situation. Suddenly he asked an unexpected question: “How are the rations?”

Without sugarcoating it, I explained to him the situation as it was. “Our rice supply is no problem, but we could use more vegetables, sugar and some sweets,” I told the general. Without replying, he nodded his head and that was the end of the briefing.

The division’s chief KMAG adviser, who had witnessed this exchange, complained, arguing that there was no need to concern the supreme commander with the unimportant details of food rations, and anyway food was the responsibility of the Korean government. Pointedly, I said that the supreme commander himself had asked me, and I hadn’t brought up the issue.

“The United States entered this war to help Korea, didn’t it?” I shot back, and the argument was closed. 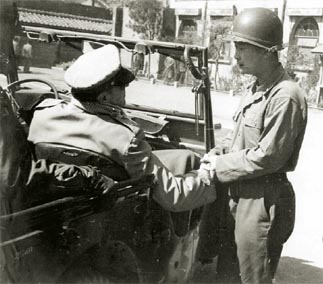 It was actually an embarrassing thing to admit, but the South Korean forces were fighting without being properly fed.

We usually mixed barley with rice and other grains, but during battles we only ate rice, as barley required much more time to be prepared. Soybean paste and red pepper paste were provided by the government, but there was very little meat. The military sometimes purchased the odd pig or cow from farmers near our bases. Sometimes there was soup made from boiled vegetables or bean sprouts without fish or meat. The occasional salted fish was on the menu. You can’t really compare the food with what is being served today in the military, but considering what the Korean people ate during the time, we couldn’t complain.

The U.S. forces were different in that regard. They ate three grades of rations: A, B and C. A rations included steak, while B rations consisted of simpler foods such as sausages. C rations were the field rations that were canned and easy to carry around.

The C rations were very popular items with the Koreans who worked with the U.S. military, especially if they could occasionally get their hands on them. A whole box of C rations could be sold for roughly 10,000 won ($9). Considering that a lieutenant colonel’s monthly salary at the time was 3,000 won, the money that people were willing to pay for C rations was a good indicator of their popularity.

A week after the visit from MacArthur, massive shipments of food started to arrive. The general had listened and given the order to send food items such as squid and fish to Korea.

The ROK First Division entered into action again with the launch of Operation Tomahawk, an airborne operation targeting Munsan. General Ridgway drew on his experience of having commanded both an airborne division and airborne corps, aiming to cut off enemy forces from their main body, isolate them and then destroy them systematically.

It was an operation that called for a linkup between various elements. The airborne forces would be dropped into the target zone behind enemy lines to cut off their retreat and occupy strategic points, preventing enemy forces from destroying war material. But if the airborne troops were not linked up properly with advancing ground forces they could face the danger of being annihilated.

During the Korean War it was the second airborne operation to be conducted. The first had occurred in October 1950, when a large U.S. airborne force was dropped at Sukcheon, South Pyongan Province.

At the time the ROK First Division linked up with the U.S. troops successfully, but it seemed that was not enough to convince the officers of the U.S. 187th Airborne Regimental Combat Team. I repeatedly had to assure the U.S. officers that my unit was up to the task ahead.

We had to time our advance in line with the 187th drop over Munsan. On March 23, 1951, my division left Seoul and charged up the road for Munsan, coordinating our attack with the parachute drop. Kim Chum Kon’s 12th Regiment led because the 12th had experience in linkup operations. A battalion of U.S. tanks had been attached to the division for fire support and to act as a vanguard for our push toward Munsan.

The 187th intended to advance from Munsan to Uijeongbu to link up with the U.S. Third Division and close the net on the enemy trapped between the two forces.

A total of 3,447 soldiers dropped from 135 transport planes, decorating the sky above Munsan with little black dots. Over the following five days, a total of 220 tons of supplies and equipment including 105-millimeter howitzers was dropped into the area. Operation Tomahawk’s objective was to encircle some 6,000 men of the newly organized NKPA I Corps.

Only a single NKPA regiment was mopped up as the enemy forces quickly managed to escape from the closing trap. Still, the operation was a success as we regained the area along the 38th parallel that we had lost three months earlier in January. For the third time, I stood on the banks of the Imjin River and vowed that my division would never again be pushed back from here.