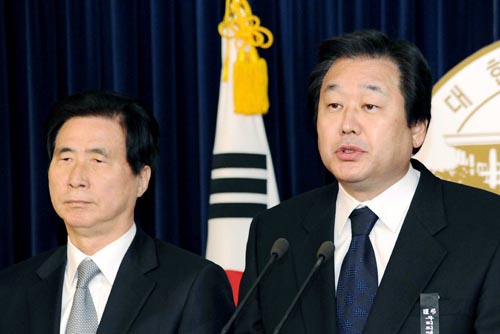 GNP Representative Kim Moo-sung, right, announces his bid to become the floor leader for the ruling party at a press conference yesterday. [NEWSIS]

The ruling Grand National and opposition Democratic parties yesterday finalized the timetables to select new floor leaders, as prominent lawmakers from each side announced their bids to represent the parties starting in June.

GNP Representative Kim Moo-sung yesterday announced his bid to become floor leader for the ruling party. “I will create harmony within the party,” said Kim, a four-term lawmaker. “I will also create a political culture of respecting others by restoring the GNP’s political capability and the democratic process to cooperate with the opposition parties.”

Kim’s running mate is Ko Heung-kil, who seeks to become the chief policymaker of the GNP.

Once called the most prominent member of the pro-Park Geun-hye faction, although he and Park are now estranged, Kim stressed party unity. “How long will we have to be held up by [factional strife]?” Kim said. “Unity inside the party is the strongest foundation on which to restore public confidence in the Grand Nationals and win the next presidential election.”

Kim will compete against Representative Lee Byung-suk, a pro-Lee Myung-bak faction member. The three-term lawmaker announced his bid last Thursday, vowing to “advance the nation through the centrist pragmatism,” the governing philosophy of President Lee.

On the Democrats’ side, Representative Park Byeong-seug made his bid public yesterday. Park said the Democrats, under his leadership, will fight against Grand National policies that benefit the wealthy and privileged.

“When we have a battle, we need a strategy, not just will,” he said.

He also promised to lead the Democrats to victory in the June local elections and July by-elections and revive the party’s popularity. “I will pave the way for the DP to win the 2012 legislative and presidential elections,” he said.

His rival is expected to be Representative Park Jie-won, the party’s current chief policymaker, who is scheduled to announce his bid today.