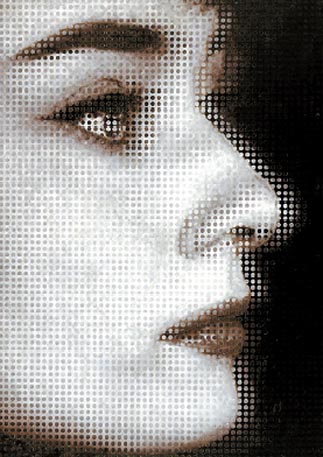 Kim Joong-sik uses tiny painted dots to give a holographic effect in his work “The Harmony of a Duet 5.” [YONHAP]

HONG KONG - It seems reasonable to imagine that the works of South Korean artist Kim Joong-sik would have found favor with pop art legend Andy Warhol.

Warhol once said his idea of a good picture is “one that is in of focus and of a famous person,” and by that standard Kim comes up trumps with his vivid depictions of popular icons like Elizabeth Taylor, Marilyn Monroe and James Dean.

Pop art, the visual art movement that became prevalent in the United States in the 1960s, aimed to challenge traditional notions of what constituted fine art by seeking its inspiration from commercial images and items of mass culture.

In Kim’s work, however, the familiar images are transformed and given an eye-catching twist through his use of innumerable tiny painted dots, giving a holographic effect.

“I got an idea of using these dots, when I was in church, seeing my pastor lecture in front of an LED [light-emitting diode] screen board,” Kim told Yonhap News Agency at the Friday opening of his first solo exhibition in Hong Kong. “The inspiration of overlapping two objects through dots came from it.”

The 48-year-old artist said he wanted to create a different visual experience, creating a new third image by overlapping two photographic depictions of a celebrity.

“The Harmony of a Duet 5” portrays the graceful profile of Audrey Hepburn, whose closed, red lips seem trembling, helped by what he calls a “doubling” effect.

A portrait of John Lennon with hair disheveled depicts the immortal British musician immersed in thought, Kim’s medium giving the impression that he is shaking his head.

“I used the images of these well-known figures, because it was a good way for an artist to get connected with the masses,” Kim said.

The intricacies of his pieces often lead to the misunderstanding that they are made by superimposing photographs on top of each other.

“Most of my works are painted twice on canvases. If you take a closer look, you can feel the texture of painting materials,” Kim said, letting the Yonhap reporter touch the painting.

A number of people were wowed at the opening, realizing that his works were all made without any computerized technology.

“I want to set up my own new genre within pop art. With this ‘dual canvas structure’, I will let audiences see more than one image contrast or blend with [another],” he said. “I tried to navigate the gap between real and virtual, East and West, tradition and modern style, and human and materials.”

Kim, who studied painting in Korea and Ecole Nationale Superieure des Beaux-Arts in Paris, selected well-known Renaissance painting images as his subject matter, in addition to the cultural icons, juxtaposing some of them with Korean porcelain vases.

Kim said he is currently working on landscapes based on the same technique for next year’s exhibitions.

The exhibition at Moon Gallery in downtown Hong Kong continues until May 13, featuring some 20 of his works.