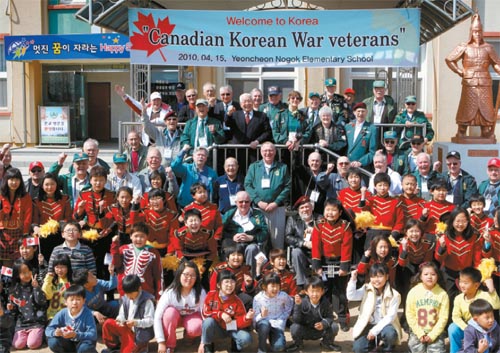 Some 60 Canadian veterans of the Korean War visited Nogok Elementary School in April to donate 300 English books to the students. The school was built with funds from the veterans. Photo by Oh Sang-min


YEONCHEON - Three charted buses carrying some 60 Canadian veterans of the Korean War drove into Nogok Elementary School, located in the city of Yeoncheon, Gyeonggi, as the school band played “The First Post,” the famous horse racing music. The Canadian veterans were here on a week-long visit to Korea to commemorate the 60th anniversary of the outbreak of the 1950-53 Korean War.

As they disembarked from the bus, some leaned on walking sticks and some sat in wheelchairs. They were returning to Nogok Elementary School for the first time in many years.

The school, located only a short distance from the 38th parallel, was established by the 25th Canadian Infantry Brigade at Chinmokchong, a location of the brigade’s headquarters during much of the Korean War.

Although the school was built by Korean labor, it was funded by Canadians who came to Korea as members of the United Nations forces following the outbreak of the Korean War on June 25, 1950.

“I must mention William Sinclair,” Mervin Fediuk, 76, a veteran who helped establish the school, said during a speech at the event.

According to Fediuk, Sinclair was a Canadian dentist deployed to Korea during the war to treat Canadian soldiers. Fediuk was Sinclair’s assistant.

“Sinclair formed a committee during his eight-month stay in Korea to help Korean children,” Fediuk said. “He went around asking soldiers to chip in to help the children with the money that we were thoughtlessly spending to buy drinks,” he continued. “He just loved Korean children.” 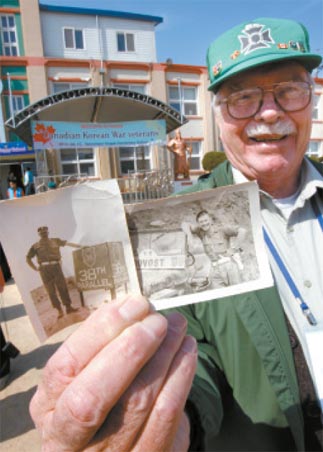 Canadian Beverly Maxwell holds two fading photographs of him as a soldier during the Korean War.

He became involved in the school through a Canadian nurse named Lotta Hitschmanova.

Hitschmanova, who came to Korea in 1952, thought that the town needed an elementary school so she went to Gen. John Rockingham with her request. But he said there wasn’t much he could do, because the soldiers were “too busy fighting the war.”

Two years later she tried again. This time she met the brigade commander, Brigadier Allard, who introduced her to Sinclair.

“He was mesmerized by her,” said Fediuk. “Dr. Hitschmanova’s energy and devotion to Korean children impacted the soldiers. And I know it greatly impacted him too.”

Hitschmanova and Sinclair started putting their ideas into action. The Koreans were eager to build a school, but did not have the money nor the materials to do the job.

“They needed materials, equipment and moral support. And that’s what we did,” Fediuk said.

The Canadians provided the funding for the school, Fediuk said, adding that they got some help from their American counterparts, who provided heavy equipment and materials to the Korean workers who eventually built the structure.

During the commemoration event, the Canadian veterans donated around 300 children’s English books to the students. As the veterans handed out small badges with the Canadian flag, the students rushed back to receive a couple more.

“I got a little emotional when the students ran up to the veterans to get more badges,” Fediuk said on the bus going back to the hotel.

“Those students reminded me of the children during the war. They had nothing. No food, no clothing, no home.” He said that those memories were so powerful that it was difficult for him to hold back tears during his speech earlier.

The veterans were not the only ones enjoying the event.

“I got three badges,” Jeong In-ha, a third-year student at the school, exclaimed to his friend.

Looking at the Korean students grinning from ear to ear, the Canadian veterans reminisced about their time here.

“They are so lovable,” said Philip Doucette, 76, a veteran who served in Korea for a year when he was 19. “Back in those days, children would come up to the soldiers, dancing and singing in order to receive some more chocolates or candies,” he said as he was handing a flag badge to one of the students.

The veterans also remarked about Korea’s rapid pace of development since the war.

“Just fifty years ago, there was nothing. Everything was torn apart, and everyone was hungry,” said Frederick Mundle, 75, who joined the military at the age of 16 by lying about his age. “But everything is so advanced now. I knew my way around here back then, but I don’t think I would anymore,” he said.

Fediuk believes that Korea’s rapid development is due to the work ethic of the Korean people.

“They are so diligent and such hard workers,” Fediuk said. “Even the little kids back in 1950s wouldn’t waste time. They would help their parents and look after their siblings.”

The Canadian veterans helped establish another school in 1954 called Paikhak Elementary School. Later, the number of students increased and the school moved to a new location, eventually becoming the Paikhak Branch of Yeoncheon Middle School. It had a total of three classes with 81 students as of 2009.

“Sinclair had a big heart for those children,” Fediuk said. “Everyone here has a soft spot in their hearts for Koreans and Korean children.”

Canada dispatched 26,791 soldiers to Korea during the war, the third largest number of soldiers among the UN countries.

During the three-year period, 515 Canadians died, 378 of whom are buried at the United Nations Memorial Cemetery in Busan.