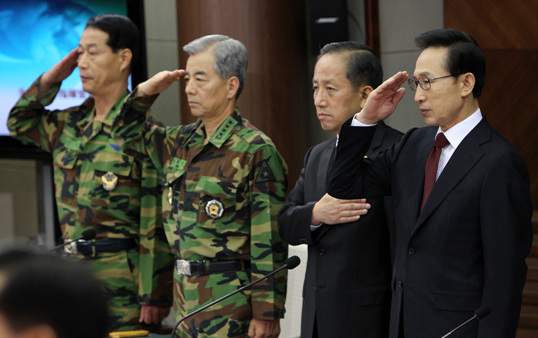 
President Lee Myung-bak said today he will launch an ad hoc task force at his office to overhaul South Korea's national security system, which has been reeling from the deadly March sinking of a Navy ship near the sea border with North Korea.

In an unprecedented meeting with the country's top military commanders, Lee vowed to take clear and stern measures against those responsible for the sinking of the Cheonan corvette near the western sea border with North Korea on March 26, as soon as the ongoing international probe is completed.

"I will immediately form a tentative presidential organization to assess the national security posture as a whole and devise related measures," Lee said at the meeting, attended by more than 150 commanders from the Army, Navy, and Air Force. It was the first time a South Korean president has chaired the commanders' meeting, which has been convened by the defense minister since the country's military was founded in 1948, presidential aides said.

The president also said he will bolster the function of the "crisis management center" at the Blue House that has served as a control tower for responding to emergency situations.

Lee and the military leaders, clad in uniform, began the meeting with a moment of silence for the 46 sailors killed when the 1,200-ton Cheonan sank just south of the inter-Korean sea border.

Investigators have said the wreckage salvaged from the disaster suggests the ship was broken in two by a non-contact explosion, raising suspicions of a North Korean torpedo or a sea mine.

Lee called the incident a grave international issue involving inter-Korean relations, and said that is why he asked foreign experts to join the investigation.

"A clear fact so far is that the Cheonan did not sink due to a simple accident," he said.

The tragedy, one of the worst in South Korea's naval history, has brought the country's defense under scrutiny and media criticism.

Lee stressed that the Cheonan incident was a stark reminder of the grim reality that South Koreans live next door to "the world's most belligerent nation."

"When this incident occurred, I had an intuition that it was a grave international issue involving South and North Korean relations," the president said in his 10-minute address, which was broadcast live. "And I instructed [the military] to find the cause through international cooperation."

The Blue House said his remarks were a message not only for the military but also for ordinary citizens.

Lee called for a sweeping reform of the military, which he said must address its traditional "vertical and bureaucratic organization."

"We have one thing to immediately undertake even before the cause is found," Lee said during the meeting, held at the defense ministry compound in Seoul. "It is to review our security posture across the board."

The president was to lunch with the commanders after the morning session. The afternoon session will be chaired by Defense Minister Kim Tae-young and will be aimed at discussing lessons from the Cheonan incident and systems to prevent a similar disaster.

South Korean officials earlier said the incident will serve as a turning point in their nation's defense system. [Yonhap]