Kadokura shows his warmer, softer side - off the mound

Kadokura shows his warmer, softer side - off the mound 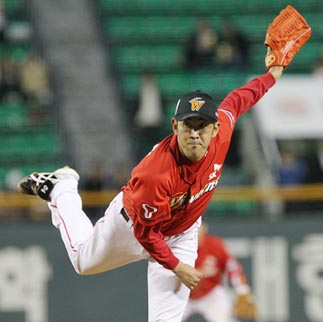 Ken Kadokura’s hard work in training is paying off with a record of seven wins and no losses so far this season. [JoongAng Ilbo]

Baseball fans might be accustomed to the intense and competitive side of Ken Kadokura of the SK Wyverns, but once he steps off the mound, he becomes quite the caring family man.

Despite his 37 years, Kadokura boasts a sterling record of seven wins and zero losses with an ERA of 1.67 and 49 strikeouts in 30 and two-thirds innings this season.

Kadokura has a loving and supportive family, and they may be contributing to his strong start.

“I love my family but I don’t think I can ever measure up to Kadokura,” said teammate Gary Glover. Kadokura is married to a Japanese-Korean woman, Tamie, and has a 7-year-old daughter, Mio. During the second round of the playoffs last year, Tamie and Mio visited Korea to watch the veteran pitcher. With his family looking on from the stands, Kadokura put together a solid performance against the Doosan Bears to help his team win the game.

Known more for his forkball and control than high-velocity pitches, Kadokura spends his time away from the game helping Mio with her homework and taking Tamie for outings. On his personal Web page are pictures taken with his family at famous landmarks such as Gwanghwamun, Gyeonbok Palace and Namdaemun. Professional athletes are often pressed for time to devote to loved ones, and that rings especially true for a player whose family is back in Japan.

“I like spending time with my father more than anything else in the world, but since he is playing in Korea, I will have to wait,” said Mio.

Kadokura is also stepfather to Yuki, 22, a baseball player himself. In an effort to help and impress his son, Kadokura asked manager Kim Sung-geun to let Yuki join the Wyverns’ training sessions in August of last year.

“It’s an honor to watch and learn professional baseball thanks to my father,” Yuki said.

For his part, Kadokura finished the season strong and dedicated his effort to his son. “I pitched hard to look good in front of him,” he said.

A consummate professional who takes care of himself off the field, Kadokura is known to keep detailed track of his pitch counts. SK’s translator Kim Myung-hwan says he has rarely seen Kadokura drink during his stay in the Korea Baseball Organization.

“He’s a good guy. He gets along with his teammates well and compared to other Japanese players, he tries hard to accept Korean culture,” said Kim. “But above all else, he is family-oriented. To Kadokura, his family always comes first.”

As manager Kim would explain, Kadokura has gone the extra distance to get in top form this season.

“We started winter training camp on Jan. 5 in Kochi, Japan, and I was surprised to see Kadokura there,” said Kim. “That’s not common among veteran Japanese players.

“He put a lot of hard work into training so I knew it would pay off this season. He had a tendency to struggle after the fifth inning but that has not been the case this season.”