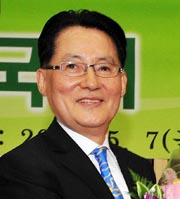 The Democratic Party elected yesterday political heavyweight Park Jie-won as its floor leader, and he vowed to bring changes to the nation’s largest opposition party to win the June local elections and prepare to win legislative and presidential power.

In the election, 81 out of the 88 DP lawmakers cast ballots. Park won 49 votes, while his challenger, representative Kang Bong-kyun, won 31 votes.

Park, 68, was the closest confidant of the late former President Kim Dae-jung. A native of Jindo, South Jeolla, Park served in key posts in Kim’s government.

Park was a businessman living in the United States in the 1970s, but his meeting with Kim, who was in political exile in the country, reshaped his life. Park’s political career began in 1992 when the Democratic Party sponsored him as a proportional representative. During four years as a lawmaker, Park was the party’s spokesman.

After Kim won the presidential election, Park became his spokesman and also served as culture and tourism minister and presidential chief of staff.

He also worked negotiated the first ever inter-Korean summit in 2000, but later was convicted and imprisoned after an independent probe revealed that money was paid to the North for the meeting. Park was found guilty in 2003 of orchestrating the transfer of $500 million to North Korea.

Park was pardoned and reinstated in late 2007 and won the April 2008 legislative election without a party affiliation. He joined the Democratic Party later that year.

“For an opposition party, the grounds for a fight is the National Assembly, but how much further should we have to stay overnight to stage sit-ins and boycott legislative sessions?” Park said yesterday in his acceptance speech. “The Democratic Party has a decade of experience as the ruling party, and I believe we should make many changes in our way of contesting issues in the legislature.”

Park proposed to amend the party’s constitution to improve communication among lawmakers and end chronic problems associated with regionalism.

“All of the dynamic presidential hopefuls of the party must join the leadership,” he said, proposing that the party’s chairman and supreme council members be selected through a single election.