Ahn Jae-hun, 51, operates the massive wooden machine that his mother has used to make noodles at her shop in Geumcheongyo Market for more than 50 years. By Kwen Hyek-jae


A visitor to Seoul half a century ago would be shocked to return today. The old city has been replaced by cutting-edge high-rises, and more than a few prefab concrete eyesores.

Traditional buildings were seen as disposable, casualties of Korean modernization that were discarded along with old ways of thinking.

But fortunately for those hoping to connect with an earlier age, the bulldozers missed a few spots. The Seoul of the 1960s can still be found at Geumcheongyo Market, located in the area west of Gyeongbok Palace in northern Seoul.

Take line No. 3 to Gyeongbokgung Station and walk out exit 2, then turn onto the street between Paris Baguette bakery and the cell phone shop. Merchants crowd the road, selling wares lined up on wooden boards, not a common sight downtown these days. Geumcheongyo Market is small, less than 200 meters (655 feet) long, and narrow, about 5 meters or so - not enough room for a passenger car. 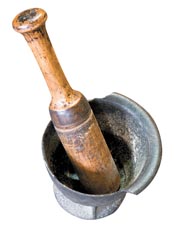 This old mortar and pestle is still used to grind sesame at Kwak Jong-su’s mill. By Kwen Hyek-jae

At a glance, it looks like just another outdoor traditional market. Take a closer look, however, and you will find something different here.

A ways down the alley a black signboard appears bearing the word “cheolmul,” or hardware, in white paint. The signboard is 40 years old, and Yang Dong-tae, 68, the owner of Hwanggeum Hardware, has been doing business here for over 20 years.

“The market was originally located down there, and so was my store,” Yang said, pointing toward one end of the alley. “But I had to move up here when a road was opened through the market’s original site.

“I brought the signboard with me when I moved,” he explained.

A 20-minute walk from the hardware store there is a mill, run by the same family for two generations. Inside equipment is scattered about: a well-thumbed sieve, a cracked iron mortar and pestle. At the entrance of the store is a “money basket” instead of a cash register. Everything’s over 40 years old, but it’s still in use.

“I inherited this mill from my father, and I still use many things that my father used,” says Kwak Jong-su, 53, the current owner of the mill.

“Old customers still often come to ask me to grind sesame or clean red peppers, as they have done for years, and that’s when the [sieve and mortar and pestle] do their part,” he said. 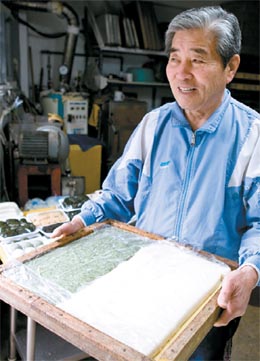 Kwak Jong-su, 53 uses a sieve in the mill passed down to him from his father in Geumcheongyo Market. By Kwen Hyek-jae

The market, which starts near Gyeongbokgung Station and ends toward Baewha Women’s University, runs along the border between Chebu-dong on the right side and Naeja-dong on the left.

Even the restaurants in the market have menus likely to bring back memories. A noodle shop run by Park Jeong-im, 77, has been open for more than five decades. Park still makes noodles with her son Ahn Jae-hun, 51, every morning, using a big, old wooden machine dusted with flour.

Park has strong opinions about noodle cuisine, and can’t resist offering unsolicited advice. “When you cook frozen noodles yourself at home, you should put them into boiling water directly, without letting them thaw before cooking,” she said.

With its friendly people and aging buildings, Geumcheongyo Market is a dose of pleasant nostalgia for many - but not all appreciate its charms. Developers have razed dozens of neighborhoods in recent years, making markets like this one scarce. The historic neighborhood of Pimatgol, located north of Jongno in downtown Seoul, was one of the areas affected by urban redevelopment. What to do with Pimatgol’s clusters of old shops and restaurants - which developers see as eyesores - is still a controversial issue, so much so that it was recently used as a campaign issue by an opposition candidate for Seoul mayor. 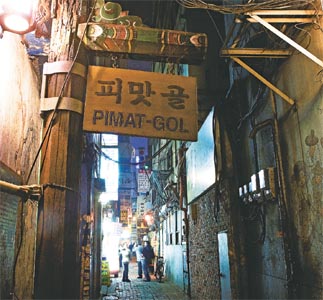 Pimatgol was once a route used by commoners to approach Gyeongbok Palace in the Joseon Dynasty (1392-1910) days.

The alleys from behind the Kyobo Building in Gwanghwamun to the YMCA Hotel in Jongno that make up Pimatgol have their roots in the Joseon Dynasty (1392-1910), when it was a side route used by commoners to approach Gyeongbok Palace while avoiding the horses dignitaries rode down the main Jongno road. A slew of cheap food stands sprouted up in the area, and Pimatgol emerged as a vibrant blue-collar commercial district in the middle of downtown.

Cheongiljib, a traditional Korean pub, began selling bindaetteok and makgeolli in Pimatgol in 1945. Its heyday came during the 1970s, when it began attracting hungry people with light wallets and nostalgia-seekers.

But the downtown fixture met a tragic fate at the beginning of this year when it was forcibly moved by the Seoul government as part of the Pimatgol redevelopment plan launched in 2003. Regulars and the public mourned the store’s closing as the end of an era.

Cheongiljib has been relocated from its classic digs to the nearby ultra-modern Le Meilleur building - the new home proposed by the city government for many doomed eateries like it. 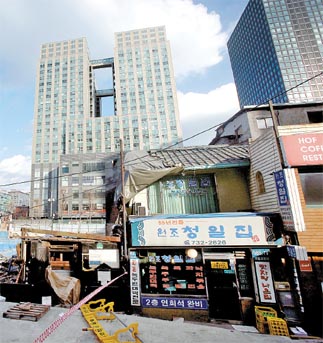 Today a development project is pushing old establishments like Cheongiljib, above, into the Le Meilleur building, seen looming over the neighborhood. [JoongAng Ilbo]

Some slight consolation came in February, when the pub temporarily shut down to prepare for the move, and the Seoul Museum of History revealed a plan to restore the old Cheong-iljib in its exhibition hall to help people remember the historic site.

“Last year, while we were looking for items to represent Seoul over the past half century since the Korean War, we learned of the Pimatgol redevelopment plan and immediately embarked on research in the area,” said O Mun-seon, a curator at the museum.

“Cheongiljib was one of a few restaurants in Pimatgol where we were allowed to make a thorough examination of the articles it had,” O said. “With the owner’s consent, we started to collect stuff from the pub, including tables, a millstone used to make bindaetteok, makgeolli kettles and glasses, and brought them to the museum at the end of January when the pub was about to close.”

She added, “While Cheongiljib the pub now has a totally different atmosphere in a new setting, the reproduction of the pub in the museum is expected to give off the old jumak [traditional inn and tavern] atmosphere that Cheongiljib used to have.”

The exhibit was initially scheduled for July, but it has been postponed and is now set for this fall, O said.

Though it may be too late for Cheongiljib, some of its neighbors may yet prevail. In the face of continuing public opposition to its redevelopment schemes, the Seoul government recently decided to revise its policies regarding the Pimatgol redevelopment plan.

“We will come up with new design guidelines for the redevelopment of Pimatgol so that we can maintain roads and old stores there instead of removing them. We are making efforts not to have another Cheongiljib,” said Cho Sung-kuk, a Seoul city government official in charge of the city’s environment maintenance program in the Jongno area.

The northern part of Geumcheongyo Market is also scheduled for redevelopment, which means that it could face the same fate as Pimatgol. Fortunately, the sacrifice of Cheongiljib might also help save these old shops.

“While redevelopment plans for the area west of Gyeongbok Palace, which is home to many hanok [traditional homes], had been discussed for some time, our basic stance toward the matter was initially no redevelopment of the area in fear of damaging an essential part of Seoul’s history,” said Kim Jin-woo, the head of the hanok culture task force at the Seoul Metropolitan Government.

“However, there were a number of residents who wanted redevelopment of the area, forcing us to go ahead with the redevelopment plan, but now we have put many restrictions on redevelopment.”

O at the Seoul Museum of History understands the dilemma. “The issue of redevelopment of an area is always tricky due to the diverse interests involved.

“In these circumstances, what we can do is make efforts to retain our history and relics as much as we can, and that’s what the Seoul Museum of History is doing now by designating historic sites that require further study every year in preparation for possible redevelopment.”

O said, “This year, we plan to make a survey of four historic areas currently under the city’s redevelopment plans, including the area west of Gyeongbok Palace, so that we can keep the traces of old Seoul in case the redevelopment project actually begins.

“Our study results will be documented, to be shown to the public in the form of an exhibition around the end of this year or early next year.”