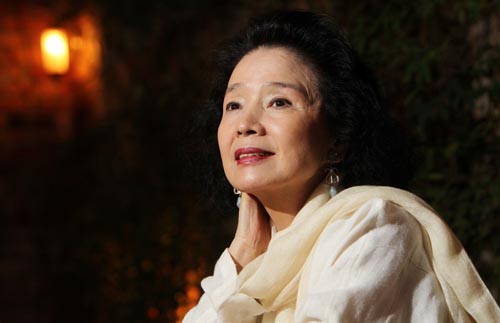 Yoon Jung-hee is one of three actresses, along with Nam Jeong-hee and Moon Hee, who came to represent film in Korea in the ’60s, much as Grace Kelly, Ingrid Bergman and Elizabeth Taylor were the stars of their generation in Hollywood.

But she has been absent from the screen for 16 years, meaning that only die-hard fans of classic Korean film will remember her name now.

This year Yoon returns to film with a starring role in the movie “Poetry” by Korean director Lee Chang-dong. The film competes for top honors at the 63rd Cannes Film Festival this month. Lee’s film “Secret Sunshine” (2007) was also screened at Cannes, and its female star Jeon Do-youn was the first Korean woman to win the best actress award at the international festival.

“I’ve had many offers to reappear on screen but I was waiting for the right script and director,” Yoon said. “When Lee asked me and my husband out to dinner two years ago, he said he was planning a movie and wanted to work with me. I didn’t know the storyline but accepted his offer right away because he’s a reliable director.”

Yoon, 66, made her debut in 1967 with the movie, “Cheongchun Geukjang,” which means Cinema for Young People, and immediately became a sensation. After seven years of living the glamorous life of an actress, she married pianist Paik Kun-woo in 1976. The two now live in France. She has occasionally returned to Korea to make films, and her last appearance before Poetry was in “Manmubang” in 1994.

The movie Poetry is about a 60-year-old woman named Mi-ja who decides to take a poetry class and immerses herself in writing.

Oddly enough, Mi-ja is Yoon’s real name. Lee said he decided to name the character after Yoon as a way to show his respect for a woman he regards as one of Korea’s representative actresses.

“The first scene that I filmed was of Mi-ja looking up at a tree,” says Yoon. “It wasn’t too difficult to get into character, but the question of how to express Mi-ja had been a question I asked repeatedly until the very end of the filming.”

Yoon said that the film industry is quite different now than it was in the past. When she was starting out, actors’ and actress’ voices were dubbed into the films.

“In my day, there was no such thing as ‘monitoring,’” says Yoon. “Being able to observe your acting on a small monitor right after a shoot really helped me improve.”

Her efforts have paid off. She is now on her way to Cannes.

“I’m very happy to be able to stand on a red carpet again,” she said. “Especially with a director in whom I have such confidence.”

With all of these developments, one wonders what she will do next.

“I have spent all my energy on Poetry and I am planning to rest for awhile,” Yoon said. “But if Lee asked, I would be willing to go as far as the Sahara Desert anytime.”

Who is Yoon Jung-hee? 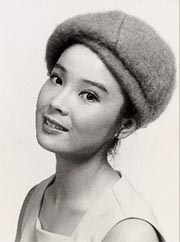 Actress Yoon Jung-hee was the reigning beauty of the Korean cinema from the late ’60s to the late ’80s. She made her debut with a starring role in 1967 in the film “Cheongchun Geukjang,” beating 1,200 other hopefuls for the job.

She was also a muse for numerous directors. She starred in a total of 330 films in her heyday and played the leading role in all but five of the films. Over the years, she has been honored with 25 best actress awards.

“I once shot three films a day back in the ’70s,” Yoon said recently on a local TV program.

Yoon shocked the film industry when she suddenly decided to head to Paris to study in 1973. That’s where she met her husband, acclaimed pianist Paik Kun-woo, and the two married in 1976.

During that time, Yoon continued to make films on a regular basis, but the 1994 war film “Manmubang” was her last work prior to her re-emergence with “Poetry.”

She has said that it was the prospect of working with director Lee Chang-dong that enticed her to return to film.