Colonial art on view, but catch it while you can

Colonial art on view, but catch it while you can 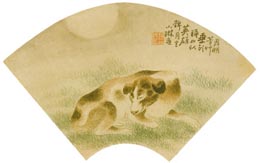 “Wolhasugu” (A dog sleeping under the moonlight) by Jo Seok-jin

Kansong Art Museum, located on a quiet street in Seongbuk-dong, central Seoul, is Korea’s oldest private museum, with a history that goes back to 1938. Jeon Hyeong-pil (1906-1962), an art collector with the pen name Kansong, set up the museum to preserve Korea’s cultural properties, which he purchased to prevent them from being sold to Japan and other countries during the period of Japanese colonial rule (1910-1945).

The museum displays the patriotism of the founder and some of the nation’s best traditional artworks, including more than 10 pieces designated as National Treasures.

But the museum is not so friendly to the public. It is open just four weeks a year - two weeks in May and two weeks in October. And there is no official Web site. Admission to the museum, however, is always free.

In this way, Kansong Art Museum resembles the proud seonbi, a scholar in the Joseon Dynasty (1392-1910) who pursued an upright but inflexible life. 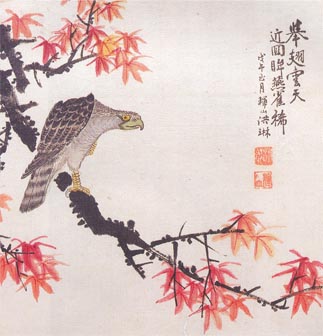 Tomorrow, the museum starts its regular May exhibition. To commemorate the 100th year since the Joseon Dynasty’s fall and Korea’s annexation by Japan, the museum will show more than 100 paintings from its collection, made by 28 artists around 1910.

The list of participating artists includes Seo Byeong-geon, who was 60 years old in 1910, and Go Hee-dong, who was only 25 then.

In their work, these artists reflect the confusion and frustration of the Korean people, according to Choi Wan-su, research director at the museum.

Some artists of the period like An Jung-sik and Jo Seok-jin resisted the changes that were occurring in Korea due to the presence of the Japanese through their work, but were limited as artists because they could not deviate too far from the classical Chinese style, according to the museum. Other artists like Hwang Cheol showed that they were influenced by Japanese art.

Visitors to the museum can only see the works displayed for the exhibition, so they will have to wait until the museum opens again to see the inlaid blue celadon vases of the Goryeo Dynasty (918-1392) and the paintings of Sin Yun-bok, one of the most famous artists of the late Joseon Dynasty, which are part of the museum’s collection.

Near the museum, there are some interesting places that are worth a visit as well. Choi Sun-u House is a 1930s-era hanok, or traditional Korean house. Choi Sun-u (1916-1984), a famous art critic and former head of the National Museum of Korea, lived in the house for eight years until his death. The house is open to the pubic for free from 10 a.m. to 4 p.m. on Tuesdays to Saturdays. It can be found on the way to the museum from Hanseong University Station, line No. 4.

Another graceful hanok called Suyeonsanbang can be found a short walk to the north of Kansong Art Museum. The house once belonged to Lee Tae-jun, a novelist during the colonial era, and it is now a cafe that sells traditional Korean teas and other drinks.


The Kansong exhibition starts tomorrow and runs until May 30. Admission is free. Go to Hanseong University Station, line No. 4, exit 6, and walk for 15 minutes in the direction of Seungbuk Elementary School. For more information, call (02) 762-0442.