Palaces have always been surrounded by an air of mystery, sparking a great deal of curiosity. Maybe that is because visitors to Korean palaces are often left to wander the palace grounds, without really getting to see what lies beyond doors that have been closed to the public for years.

But these closed palace doors are finally opening, and visitors will soon be able to step inside select buildings in three of Seoul’s royal palaces, instead of simply gazing up at the eaves and traditional multicolored paint from the outside. 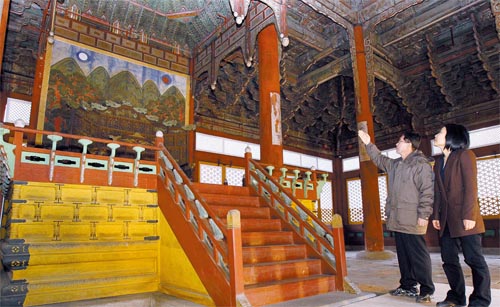 Visitors look at the throne at Junghwajeon of Deoksu Palace in central Seoul, into which visitors are allowed to walk from 9 a.m. to 4 p.m. every Saturday beginning this month. [YONHAP]

However, the opening of the palace structures has also opened up a debate about whether the increase in visitors will contribute to preservation efforts or increase the risk of damage. Some wonder if the palaces are equipped to meet the demands of an influx of visitors.

Two years ago, Korea’s National Treasure No. 1, Sungnyemun, or the Great Southern Gate, was destroyed by fire largely due to the lack of knowledge about cultural preservation techniques for historical structures. This caused the Cultural Heritage Administration to limit public access to historical structures. 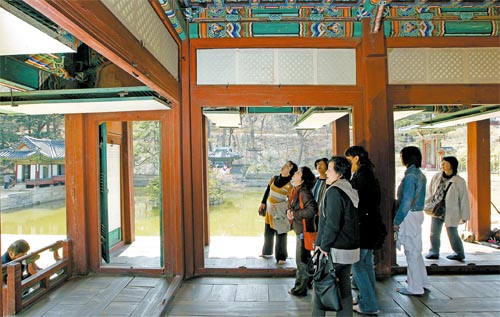 Japanese tourists look at dancheong, or traditional paint work, of the Yeonghwadang building in Changdeok Palace, which is one of the palace buildings newly opened to the public. By Oh Jong-taek

But now the CHA has changed its policy because it believes that human contact helps with preservation by ensuring that building maintenance is conducted more frequently.

Perhaps the most anticipated opening is that of Gyeonghoeru Pavilion within Gyeongbok Palace. The structure, which was once used for parties and receptions for foreign diplomats, will open in June. Inside, the floor has a lovely geometric pattern that was eaten away by moths due to the carpeting kept on the floor throughout the year, which encouraged insects to gnaw at the wood. The floor, along with the rest of the structure, will be restored to its original grandeur.

While on the palace grounds, visitors can take in the sangchameui ceremony, which was a meeting of the king and his ministers that was performed in the mornings, or watch a re-enactment of the procession of the royal family. Both activities are part of the palace’s daily schedule of activities.

Until Gyeonghoeru is open, interested tourists can head to Deoksu Palace. Starting this month, Junghwajeon, a room where the king used to meet with his ministers, is open to visitors on Saturdays.

To ensure the safety of the structure, two guards stand by in case of fire and only 20 visitors are allowed in at one time. Last year, a fire protection system was installed in the palace.

At Changdeok Palace, Yeonghwadang, which once hosted civil service exams, has been accepting visitors for a while and there is evidence that the traffic has helped preserve the structure. After the establishment of a policy to allow people to enter barefoot, the floor started to give off a soft shine. In contrast, the floor of Seohyangak, another structure in the palace that remained tightly shut, was uneven and splintered.

A special event called the Changdeok Palace Moonlight Trip has helped bring more visitors in recent months. Around 300 people gathered for the first trip, which marked the first time the palace was open during evening hours. That was three times more than expected.

The palace’s room rental program has brought businesses and government departments to the palace as well. Under the program, groups can rent out Seonhyangjae, which was originally used as a study, for meetings and other events. Heated with ondol, or under-floor heating, Seonhyangjae radiates a warm, comfortable atmosphere.

There are still many obstacles to keeping the palaces open and ensuring that they will remain safe from human damage, such as further application of palace and marketing policies. But many experts agree that it is better for a palace to be used rather than lie dormant.

“Palaces restored with great effort should be used for a specific purpose, otherwise they will just be like a movie set. There is no doubt that this will help preserve the structures,” said Professor Kim Bong-ryeol of the department of construction engineering at the Korean National University of Arts.

However, he also pointed out the difficulties of having people walk through the old palace buildings.

“The palace is split into small spaces, and people must take their shoes off before entering,” Kim said. “It’ll be extremely hard to implement an efficient application plan.”

The palaces must also secure additional personnel and funding to ensure the buildings stay open. As of now, there are 93 people employed at Gyeongbok Palace, while 94 are employed at Changdeok Palace. Meanwhile, the cost of preserving a palace is quite high. As a registered world heritage site, Changdeok Palace’s annual budget is 4.7 billion won. The cost of replacing the hanji paper that covers palace doors and windows, which must regularly be replaced, amounts to 200 million won.

Professor Kim Hong-sik of the department of construction engineering at Myongji University suggests that the preservation work be entrusted to a corporation.

“The positions of civil servants change all the time. It’s a global trend for corporations to implement long-term preservation plans instead of having civil servants be responsible for it,” Kim said. “The government should make policies and offer financial support, in addition to ensuring that the palace does not become overly commercialized.”