Upon completing their final friendly match at home prior to the 2010 South Africa World Cup, a ceremonial send-off was held for the national football team. The game was also the last chance for players on the bubble to showcase their skills as manager Huh Jung-moo is expected to trim his 30-man preliminary roster to 23, plus three injury reserves.

Prior to the start of the match, vice president of FIFA and former head of Korea Football Association Jung Mong-joon and E1 chairman Koo Ja-yong congratulated the players and shook their hands as they wished them a successful game.

At the post-match ceremony, national team players were introduced to the crowd one-by-one with a sea of fans clad in red watching from the stands and the national team manager Huh Jung-moo addressed the crowd: “I want to thank the fans for their strong support. Your continual support at the upcoming World Cup will be a big boost for our players.”

Huh and the national team will play three more games against Japan in Saitama on May 24 before they set up pre-tourney camp in Austria and play Belarus in Kufstein on May 30 and Spain in Innsbruck on June 3. The national team will then set up their base camp in Rustenburg, South Africa on June 5 to prepare for their opening match against Greece on June 12. 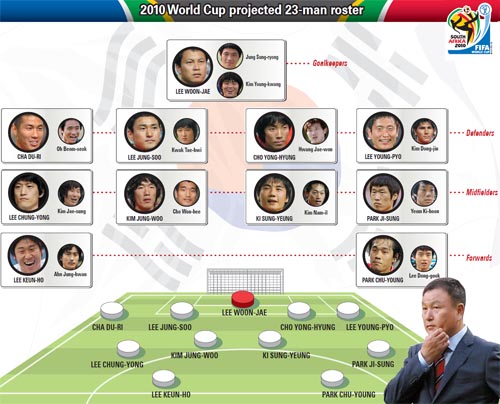 With the coaching staff having already settled on their starting goalkeeper Lee Woon-jae and his two backups, Huh will have to make the difficult decision of cutting four players from the current roster. Without a doubt, the strength of the current national team comes from the overseas-based players. The current team boasts 12 players who currently play professionally abroad, the most ever.

“Unlike in the past, our players are capable of not panicking and sticking to their game plan even against the likes of Lionel Messi,” said Park Moon-sung, an SBS football analyst.

Some of the notable overseas-based players - like Park Ji-sung of Manchester United, Lee Chung-yong of Bolton, Ki Sung-yeung of Celtic FC, Lee Young-pyo of Al Hilal, Cha Du-ri of SC Freiburg and Park Chu-young of AS Monaco - have secured spots on the final roster.

At the forward position, Lee Keun-ho of Jubilo Iwata, Lee Dong-gook of Jeonbuk Motors and Ahn Jung-hwan of Dalian Shide are the top candidates to make the final cut.

The midfield positions are set but reserve midfielders can come in handy when Huh decides to go with a formation featuring one forward and five midfielders.

“Huh has the option of moving Park to center midfield and inserting either Kim Jae-sung or Yeom Ki-hoon into the lineup,” explained Han. “Kim Nam-il and Cho Won-hee are defensive-minded veteran midfielders who can provide stability and support for the defense.”

Cho Yong-hyung and Lee Young-pyo have secured two of the four spots on defense. Lee Jung-soo of the Kashima Antlers and Kwak Tae-hwi of Kyoto Purple Sanga are vying for one of the center defense position while Cha Du-ri of SC Freiburg and Oh Beom-seok of Ulsan Hyundai are expected to split time at the right fullback position.

“Cha’s size and physical style of play will come in handy against a bigger team like Greece,” said Han.