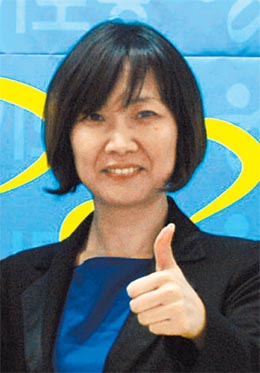 Lee Ra gives a thumbs up earlier this month after being recommended as a candidate for a Grand National Party proportional representation seat on the Gyeonggi Provincial Council. [YONHAP]

Foreign citizens with at least three years of permanent residency status were given voting rights in elections starting in 2006. The number of such voters has since doubled from 6,000 to 11,680.

The instructions on ballots in this year’s elections are expected to be in Korean, English and Chinese.

To secure these votes, political parties have attempted to recruit candidates from multicultural backgrounds, but results have been mixed.

That hasn’t stopped political parties from trying. The Democratic Party is looking into giving speeches in regional cities in second languages, while several parties are also floating non-native nominees. Tsetsegsuren Galdadrakh, who is of Mongolian descent, is standing for a local post in North Chungcheong for the People’s Participation Party, while Jang Hae-jung, Yang Deok-ja and Kim Jeong-yeon, all born in China, are running for the conservative Liberty Forward Party.

Even the ruling Grand National Party announced on May 2 it would support three naturalized candidates for local office. 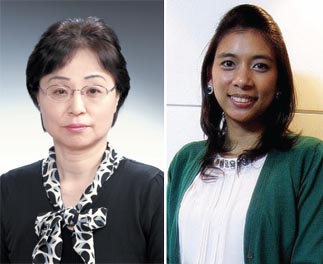 Lee Youn-hwa, above left, was another GNP candidate for the proportional representation list on the Gyeonggi Provincial Council, and Jasmine Lee, above right, was supported by the GNP for a seat on the Seoul Metropolitan Council. Both have since dropped out of the running. [JoongAng Ilbo]

Jasmine Lee, who is of Filipino descent, was supported by the GNP for a seat on the Seoul Metropolitan Council, while Lee Yeon-hwa, who is from Japan, was to be a candidate on the proportional representation list for the GNP on the Gyeonggi Provincial Council.

Despite strong media coverage and advertising by the GNP, these two did not apply for inclusion on the final list of candidates released on Thursday. However, Lee Ra, who is of Mongolian descent, is still in the race for a proportional representation seat in Gyeonggi.

GNP officials told the public that they were offering candidacies to naturalized citizens to represent the growing number of multicultural homes in Korea, but the three women’s goals, revealed in interviews with the JoongAng Ilbo, were far more specific.

Lee Ra, who met her husband in Mongolia and came to Korea in 2003, said that her biggest goal was to set up after-school study rooms for children from multicultural homes.

“I want to set up study rooms for children whose parents are busy at work. When it comes to the education of their children, immigrant parents care as much as Koreans,” Lee said. “Since many of these children need to improve their Korean, it is crucial that they receive the proper supplementary education as they advance from elementary to middle to high school.” 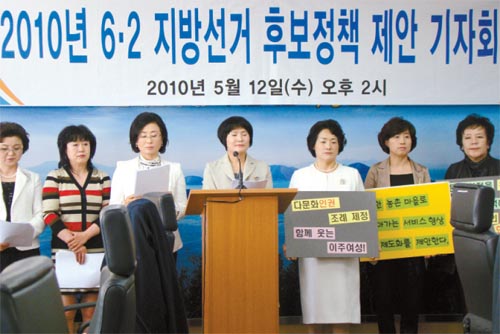 A group representing the South Gyeongsang YWCA asks candidates in the upcoming regional elections to pledge to support the needs of ethnic minorities at a press conference on Wednesday. [YONHAP]

Lee Youn-hwa, who currently heads a multicultural women’s group in Gyeonggi, also saw nurturing children from multicultural homes as an important task that could help Korea as a whole in the future.

Lee Youn-hwa met her husband in Kyoto while he was studying abroad there and came to Korea in 1988 after her wedding.

As a mother of two daughters, one in her first year of university and the other a second-year high school student, Lee had hoped to make heard her opinion on educating the second-generation children of immigrants and multicultural homes, and nurturing their unique backgrounds.

“I merely wanted to help and represent others who share commonalities. I’m very disappointed,” said Lee.

“A big part of why I was not included in the [candidate] list released on May 13 was due to my inexperience and lack of knowledge. There was a lack of direction [from GNP officials], so I failed to fill out all the necessary papers and submit them on time.”

Jasmine Lee, meanwhile, had hoped to become a spokesperson for the growing number of multicultural families in Korea. Lee came to Korea 1995 upon marrying her husband, whom she met in the Philippines.

She also pointed to a lack of help from the GNP as the biggest reason for her failure.

“I failed to submit my application for candidacy because I did not receive any calls from the GNP. Due to the strong coverage in the media, there are many people who think that I have already become a city councilor,” Lee said.

According to various representatives of the GNP, conflict within the party led to the abandonment of Jasmine Lee and Lee Youn-hwa.

“There is speculation that political parties are using these candidates as a marketing ploy for the upcoming election. But the fact that an opportunity exists for candidates to represent minorities should be welcomed,” said Seol Dong-hoon, a professor of sociology at Chonbuk National University in Jeonju, North Jeolla.

“These candidates are naturalized Korean citizens and therefore it is only natural for them to participate in the political arena.”

But multicultural candidates are not the only recourse immigrants have to influence their elected officials. A group representing the South Gyeongsang YWCA held a press conference on Wednesday outlining 15 points in four categories, which it asked local candidates to make a pledge to support.

Each of the points was related to a concern the immigrant community has, among them increased employment opportunities for immigrant housewives, improved civil rights and educating people from different backgrounds and cultures.

Lee Youn-hwa is unsure about whether she will try again in the next regional election, but she has high hopes that Korea will be a better place for future generations.

“I think there will come a time when people will be able to coexist in a place without borders and language barriers, where people can coexist in unity and harmony without any biases or prejudice,” said Lee Youn-hwa.

“It’s important to have a positive outlook and contribute to the thought of providing a better place for one’s family.”