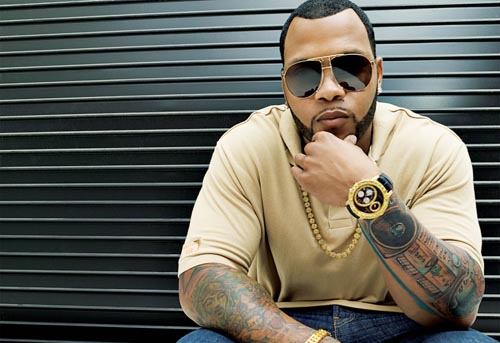 The American hip-hop star Flo Rida is holding a concert with special guest G-Dragon at the Grand Hall of Yonsei University on Friday and Saturday at 7 p.m. See MUSIC, left. Provided by Moonstone Korea

Friday to Saturday: American hip-hop star Flo Rida is making his first solo appearance in Seoul this weekend. The Grammy-nominated artist is well-known here for his collaboration with Big Bang’s G-Dragon on the Korean singer’s live album “Shine a Light.” In keeping with this relationship, G-Dragon has been invited as a special guest for the Saturday performance.

Flo Rida has recorded a number of hits, including his first single “Low,” which remained No. 1 on U.S. charts for 10 weeks. In 2009, his song “Right Round” shattered the digital sales record for singles.

Friday to Sunday: The Harlem Gospel Choir is holding a special series of concerts to commemorate Michael Jackson’s death.

The world-famous choir is currently on a global tour to honor the “King of Pop,” spreading goodwill and hope through the powerful medium of gospel music.

Friday to Saturday: Japanese acoustic pop duo Be The Voice is touring Korea to celebrate the release of their new album, “Groundscape.”

The group blends techno, hip-hop, R&B, Brazilian and folk music to create unforgettable songs. Their hit “Altogether Alone,” in particular, has been featured on numerous commercials and radio shows in the country.

May 29: One of the most innovative ensembles of its kind in Germany, the Frankfurt Radio Symphony Orchestra is celebrating its 80th anniversary by holding a concert in Seoul.

Hans Rosbaud, the orchestra’s first conductor in 1929, emphasized both a traditional romantic repertoire and contemporary music. Today, Frankfurt Radio is one of the best-known symphony orchestras concentrating on these two genres.

The concert will be conducted by Paavo Jarvi. The orchestra will perform Brahms’ Piano Concerto No. 1 in D major, Op. 15 and Dvorak’s Symphony No. 9 in E minor, Op. 95.

Ongoing: This Korean musical, “Miso,” which means “smile” in Korean, is a long-running hit in Seoul. This year’s version features a reinterpretation of the classic Korean folktale of “Chunhyang.” The story describes the romance between Chunhyang, the daughter of a gisaeng entertainer, and Mongryong, the son of a magistrate. After Mongryong goes to Seoul, a corrupt politician tries to make Chunhyang his concubine. As a result, Chunhyang must choose between a loveless relationship and death.

The well-known tale of the couple’s trials and triumphs is told through traditional Korean dance, pansori singing and a samulnori percussion quartet.

In this performance, 80 actors, 37 dancers, 21 musicians and 13 samulnori players bring the story of Chunhyang to life.

The production is presented with English, Japanese and Chinese subtitles.

Performances are twice a day at 4 and 8 p.m. There are no performances on Mondays.

Ongoing: “Pan,” meaning open stage, ruckus or celebration, is a performing arts piece directed by Kim Duk-soo, one of the most revered gugak, or traditional music, performers in Korea.

The show opens with “Chukwon,” an invocation rite in which performers wish for a successful show and to bring happiness and fortune to their audience. The performance continues with “Ilgohwarak,” a percussive performance where various drums are played in harmony by a group of female drummers.

Other musical acts include a pansori excerpt from “Simcheong,” one of the five surviving pansori suites, before the show closes with “Pan Noleum,” where parts of the previous performances are mixed together to create one grand finale.

Pan is made of traditional Korean plays in which masked performers play music, dance and act in a wide and open space.

Spectators can cheer with phrases such as “jota” or “eolssigu” (“good” or “wow”), and the performers respond, which creates a lively exchange like those typically seen in traditional Korean music, theater and dance performances.

Kim has played the janggu (hourglass drum) since he was young. In 1959, when he was 7, he participated in the “National Farm Music” contest and received a presidential award. His burgeoning career led him to form a Samulnori group and in 2007, on the 50th anniversary of the group, he received the Silver Cultural Decoration of Korea and also the Fukuoka Asian Culture Award in Japan.

He is currently artistic director of Samulnori Hanullim and a professor at the Korean National University of Arts.

The performance starts at 7:30 p.m. on Wednesdays through Fridays and at 4 p.m. on the weekends.

To Dec. 31: This is a dynamic live show of traditional Korean music that incorporates Western percussion with melodies played on Asian musical instruments. B-boy, percussion and string music make this a truly fantastic visual performance.

The performance starts at 8 p.m. There are no performances on Mondays.

STONES IN HIS POCKETS

Friday and Saturday: “Stones in His Pockets” is a sad, hilarious and irresistible two-man show about the filming of a Hollywood epic in rural Ireland. Two extras on the film, Charlie and Jake, tell the story by taking on all the roles themselves. Much of the comedy of the play is derived from the efforts of the production crew to create a proper “Irish feel,” a romanticized notion that often conflicts with the reality of daily life.

After four successful years in the West End, a sensational run on Broadway, and a sold-out world tour, BH Productions is pleased to stage Stones in His Pockets for the first time in Korea in English.

To June 27: Following its success as a movie and as a play in England and Japan, the premier of “Rain Man” in Korea in 2009 received much attention and praise from the theater world.

The play follows the relationship between two brothers - one abrasive and selfish, the other an autistic savant.

Many critics praised the play’s rendering of the conflicting emotions and love that can exist between brothers. Audiences all over the world have been touched by the sincere emotions delivered by the actors.

To Sept. 12: The musical with a score that the BBC says is “wonderful” and “timeless” is returning to Korea. Based on Puccini’s opera “Madame Butterfly,” this epic production centers on the romance between a strong-willed Vietnamese woman and an American soldier during the Vietnam War.

When the musical first came to Korea in 2006, it had an audience of over 250,000 and was ranked the most popular musical of the year by Ticketlink.

The performance starts at 8 p.m. on weekdays, at 2 and 7 p.m. on Saturdays and at 1 and 6 p.m. on Sundays and public holidays. There are no performances on Mondays.

To May 26: The first film festival in Korea to highlight environmental issues will feature 100 films from 30 countries. Festival highlights include the Korean film “Asiatic Black Bears Returned to Nature” and the American film “Battle for the Xingu,” about an indigenous tribe’s fight to protect an important tributary in Brazil.

Tomorrow: Before Babel Brigade Korea, better-known as BBB Korea, has been encouraging harmonious relationships between people of different ethnic groups by holding “International Friends Day” events every year since 2007. This year, BBB will hold the special “Walk Festival” in conjunction with the Ministry of Justice.

BBB Korea is a nonprofit organization established in 2002 by citizen volunteers to help people from abroad with any language difficulties they might encounter during their stay in Korea. More than 3,500 BBB volunteers offer free interpretation services via mobile phone in 17 languages to help foreigners gain a better understanding of Korea.

Registration starts at 2 p.m. and the Friendship Walk of 5.8 kilometers (3.6 miles) will take place from 3:30 p.m. to 6 p.m. After the walk, performances by groups from a variety of countries will be held.

Tickets cost 3,000 won on the day of the festival. Pre-registration is free.

May 28 to 30: In the spring, the pink blooms of royal azaleas cover the slopes of Mount Taebaek in Gangwon.

Festivalgoers are encouraged to visit the Cheonjedan altar and Janggunbong and Busoebong peaks, which are strewn with the bright pink flowers, making for a breathtaking view.

The festival features various activities related to plants, including making masks from leopard plant leaves and making rice cakes, as well as a series of exhibitions, including the Exhibition of Wild Flowers and Rocks, Exhibition of Paper Crafts and Taebaek Tourism Photo Exhibition.

To get there from Seoul, take a bus to Taebaek terminal from East Seoul Bus Terminal.