The salvaged North Korean propeller and a blueprint showing the actual size of the torpedo were displayed yesterday at South Korea’s Defense Ministry in Seoul. By Kim Tae-seong 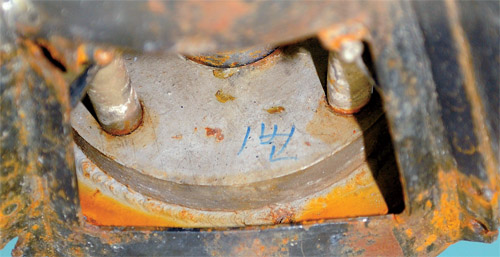 The ministry said a team of South Korean, American, Australian, Canadian and British intelligence authorities concluded that a torpedo sunk the patrol boat. The announcement of the conclusion of the investigating team, and a question-and-answer session with journalists, was broadcast live yesterday.

“We want to say that the international experts unanimously agreed to the conclusion,” said Army Lt. Gen. Park Jung-yi, the military chief of the civilian-military probe, dismissing earlier media speculations that there had been a rift among the investigators. “The foreign experts participated in all parts of the investigation and discussions and a consensus was reached through such efforts.”

At the media conference, the ministry also presented what it called “critical evidence.” Components from the North Korean torpedo, collected from the seabed of the sinking site near Baengnyeong Island in the Yellow Sea, were made public. The key piece of evidence was a 1.2-meter-long (four foot) propulsion unit, consisting of two propellers, a shaft and a motor, which was discovered by fishermen last Saturday. The unit was covered with white powder, oxidized aluminum powder used in the explosives of the warhead.

The piece, according to the ministry, is identical to the blueprint of a North Korea-built CHT-02D torpedo the military obtained earlier, the team said.

The torpedo believed to be used for the attack would have been 7.3 meters long and 53 centimeters in diameter. The warhead contained 250 kilograms (551 pounds) of explosives, while the torpedo itself weighed 1,700 kilograms.

Another key piece of evidence was a North Korean marking found on the propeller shaft, said Yoon Duk-yong, professor emeritus at the Korea Advanced Institute of Science and Technology, who co-chaired the team. The marking read “1 beon” using an Arabic numeral and a Korean letter that means “number.”

“The marking is consistent with a marking on another North Korean-built torpedo that the South obtained earlier,” Yoon said.

South Korea found a light torpedo in 2003 in the waters west of the peninsula. That torpedo was marked with the numeral four and the Korean character “ho,” meaning “unit.”

“A North Korean-manufactured torpedo that carried a 250-kilogram warhead is confirmed to be responsible for the explosion,” Yoon said. “The underwater explosion, only six to nine meters below the ship, caused a bubble jet shock wave that tore the Cheonan in two.”

According to the team, the piece was found by civilian fishing boats cooperating in the evidence collection operation by using special nets. The military asked fishermen to support the operation in order to exploit their knowledge of the area.

After finding the “smoking gun” on Saturday, the investigators thoroughly examined and analyzed the piece. The marking appeared to be handwritten, and Army Brig. Gen. Yun Jong-seong, head of the scientific investigation bureau of the joint probe, said an analysis of the ink, although it will take time, may further reinforce the team’s conclusions.

“No country [other than North Korea] marks a torpedo component with a Korean letter,” General Hwang added.

The experts also based their conclusions on evidence collected from the site of the sinking, the hull of the salvaged ship, postmortem examinations of the dead sailors, seismic waves, simulation of underwater explosions and currents near the sinking site, Professor Yoon said.

“We believe that the submarine made a detour to international waters to infiltrate to the South and approached near the Cheonan at nighttime,” he said. “Shortly after the attack, it returned to the North, following the same route of infiltration.”

The salmon-class submarine is built for export, General Hwang said, adding that newer versions of the vessel are equipped with advanced systems, including night vision.

Expressing regrets about South Korea’s failure to detect the infiltration and avoid the attack, General Hwang said the military will beef up its anti-submarine surveillance capabilities.

“It is incredibly difficult to detect a submarine when it moves underwater,” he said. “This time, we detected the submarine’s departure from the base, but we were not prepared that it would infiltrate our waters and stage a provocation. From now on, we will reinforce the shortcoming.”

The 71-member investigation team has been looking into the case since early April. The team includes 25 Korean civilian experts, 22 military specialists and three members recommended by the National Assembly. Another 24 experts from the United States, Australia, England and Sweden also participated.

“We worked closely and collaboratively, using separate tools and methods,” said Adm. Thomas Eccles of the U.S. Navy, who was a member of the probe, adding that all members of the international team agreed with the conclusion.