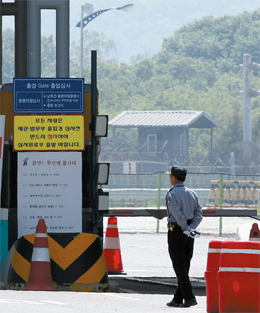 All is quiet at the Dorasan customs and immigration checkpoint in Paju, Gyeonggi, as ties between the two Koreas deteriorate. Dorasan is the last South Korean post before entering North Korea’s Kaesong Industrial Complex. [YONHAP]

The Ministry of Strategy and Finance said that it expected the fallout from the Cheonan investigation report will “not have a significant impact on the economy” in the first official statement by the government on the possible economic ramifications of the probe.

The Korean stock market and the won have fallen sharply in the past week, raising concerns about financial instability.

“The recent fluctuations in the financial and foreign-exchange markets came from a combination of southern Europe’s debt crisis and the North Korean incident,” the finance ministry noted.

But it predicted that the market will stabilize gradually, as it did last year following a nuclear test by North Korea and clashes at sea involving North and South Korean warships.

The ministry also said it has set up an emergency monitoring system to assess global financial developments.

The government “will explain its risk-control capability to ratings agencies so they don’t see this [naval] incident as a geopolitical risk,” the ministry said in a statement.

The ministry issued the statement after it held an emergency meeting with other economy-related government organizations earlier in the day.

The Kospi, the main South Korean stock market, dropped 1.83 percent on Thursday and the local currency lost 2.43 percent against the dollar, hitting a near seven-month low. The local market was closed yesterday.

Meanwhile, South Korean banks involved in inter-Korean businesses in the North are considering contingency plans if the situation worsens.

Woori Bank is the only South Korean bank with a branch in the North’s Kaesong Industrial Complex, with six employees handling loans, remittances, taxes and wage payments.

“There is no specific situation happening at the Kaesong branch now, but we are mobilizing an emergency contact channel with it,” an unnamed Woori Bank official told Yonhap News Agency.

The official said if the South Korean government demands the withdrawal of its North Korean business, the bank will follow a contingency plan including transferring customer information to the South.

Nonghyup, or the National Agricultural Cooperative Federation, had been hoping to resume business in the North after its branch operations in the Mount Kumgang area were suspended with the cancellation of South Korean tours to the scenic region in July 2008.

Some other local banks which have made loans to local companies doing business in the North are concerned that a possible closing of the Kaesong Industrial Complex could affect business with the companies.