HOW THE WAR BEGAN
Strategic success, at a dear price 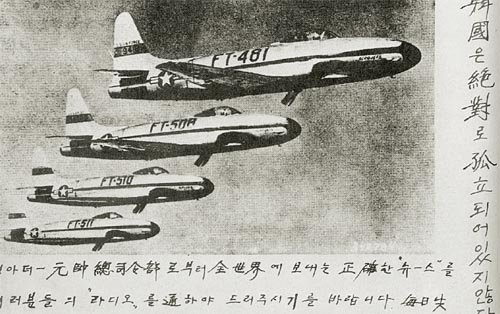 A propaganda pamphlet distributed by the South and its allied forces during the Korean War tells citizens of the superior air power of the United States, with a picture of a U.S. P-80 jet fighter. Provided by Paik Sun-yup

I still vividly remember my first encounter with U.S. forces, who had just entered the war. When the ROK Army headquarters withdrew from Suwon to Daejeon, and my ROK 1st Division was heading toward Pyeongtaek, we ran into a group of U.S. soldiers. They seemed to be part of the U.S. forces that Gen. Douglas MacArthur had dispatched to the Korean Peninsula immediately after his review of the front on June 29. The sight of U.S. soldiers on Korean soil was truly a relief at the time. They were moving northward with the new 105-millimeter howitzers in tow. The Americans told us they were part of Task Force Smith (named for its commander Lt. Col. Charles Smith) that was formed from the U.S. 24th Division stationed in Japan. A staff sergeant who was passing by asked me about the North Koreans, upon which I told him that they were not to be underestimated as they were strong and used tanks to further their advance. Nevertheless, my explanation did not seem to make a big impression on him.

“I have 10 years of experience under my belt in the artillery. I am not too worried about such enemies,” said the staff sergeant in a dismissive tone. Two days later, when we had arrived at Pyeongtaek, we saw the same elements in a hasty withdrawal mode. The North Koreans, with their superior numbers, had proven that they could match even the Americans’ excellent weapons.

Task Force Smith amounted to a total of 540 troops flown into Korea on June 30. Their main purpose was to be visible to the enemy, effectively advertising that the U.S. had entered the war in force. Their encounter with North Korean forces at Osan was a bloody one that quickly reflected the realities of war. On July 5, Task Force Smith fought a battle against some 5,000 North Koreans, mainly from the 107th regiment of the North’s 105th Tank Division. In this first official battle between the two forces, the U.S. side lost 20 men, while 130 were injured and another 36 were taken as prisoners.

There were mixed feelings about the rushed arrival of Task Force Smith. One side argued that the involvement of the unit was a success, while others said it was “premature.” Needless to say, Gen. MacArthur held the former opinion, while Gen. Matthew Ridgway was of the latter mind.

After the initial deployment of the task force, the remainder of the U.S. 24th Division was eventually deployed to the Korean Peninsula, and Daejeon was one of the first places that the unit chose to establish a defensive perimeter and put a halt to the general retreat that the task force had experienced until then. 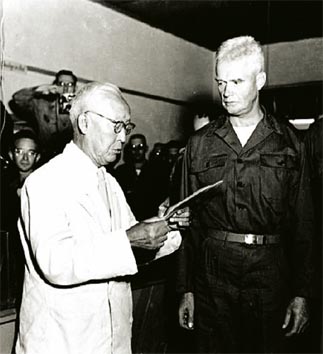 President Syngman Rhee awards Maj. Gen. William Dean a citation after he had returned from captivity in North Korea in September 1953. Provided by Paik Sun-yup

For three days, the division held out, but it became clear it was a losing battle. The fighting grew to such intensity that Maj. Gen. William Dean himself had to shoot a bazooka toward a tank. At the time, the division was a light armored division as the order to quickly deploy to Korea given by Gen. MacArthur had given the unit little time to pack any of its heavy equipment. At the end, after the unit was pushed out of Daejeon, its commanding general was captured by North Korean forces. Major General Dean had lost his way near Geumsan, having ventured, without his aide, as usual, into the area. His presence was reported by local citizens to advancing North Korean forces.

From a tactical point of view, the deployment of the 24th Division was a failure. To deploy a force that had been without any proper training for a prolonged time to the theater was just not feasible. The moment Task Force Smith entered the war zone it never had an opportunity to establish itself but was constantly pushed back. The fact that Major General Dean was captured was also a loss to the Americans.

Nevertheless, from a strategic point of view there was some value to the presence of the hastily deployed division. The North Korean forces did have to halt, and their advance was delayed for some time. It was also a clear signal to the Soviet Union and North Korea that the United States had entered the war. South Korea also received a morale boost from the participation of the U.S.

Gen. MacArthur viewed the sacrifice of the 24th Division as justifiable in light of its overall strategic value, while Gen. Ridgway, who was more of a tactician, saw the involvement of an unprepared division as a waste of manpower. MacArthur saw the conflict as a battle between communism and the free world, while Ridgway was more concerned with the immediate losses to U.S. strength.

Major General Dean spent three years in captivity. I met him again in 1958 on a visit to the United States.