Masterpieces lost in the archives

Masterpieces lost in the archives 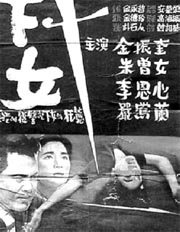 “The Housemaid,” directed by Kim Ki-young, became the talk of the town as soon as it premiered at the Myeongbo Theater in Seoul on Nov. 2, 1960. The film, which tells the story of a young servant girl who ruined a middle-class family by seducing the master of the house, captivated audiences with its strong-willed yet wicked female heroine and its distinctively dark atmosphere. The fact that the story was based on a grotesque murder in Gimcheon, North Gyeongsang, in which a maid killed an infant in connection with a love affair, increased interest in the film as well.

In the year it was released, The Housemaid topped box-office attendance records, attracting more than 100,000, together with “Romance Papa” directed by Shin Sang-ok. It swept five awards, including Best Director and Rookie of the Year, at the Korean Movie Awards in 1961.

Following the success of The Housemaid, Kim Ki-young directed a series of films on women - “Woman of Fire” in 1971 and “Insect Woman” in 1972 - and carved out a place for himself in the film world.

But the film and its director slowly faded from people’s memories, especially in the turbulence of the 1980s.

It wasn’t until 1997, at the second Pusan International Film Festival, that he was brought back into the spotlight. Then, after he passed away in 1998, the Berlin Film Festival held a retrospective of his films. And in 2003, Jean-Michel Frodon, editor-in-chief of the influential French film magazine Cahiers du Cinema, praised The Housemaid, saying: “It is a miracle that a film like this has been rediscovered 40 years after its production.”

Since then, Kim Ki-young’s films have been screened at numerous film festivals. In 2008, the Korean Film Archive, with support from the World Cinema Foundation, restored the original print of the film and transferred it to DVD. Thanks to the restoration work, the film can now be appreciated as a classic of Korean cinema.

The remake of the film by Im Sang-soo, featuring Jeon Do-yeon in the title role, was well received at this year’s Cannes Film Festival, which closed yesterday. The film was one of two Korean works in competition at the festival; the other is Lee Chang-dong’s “Poetry.”

It could be said that The Housemaid has made a brilliant comeback after 50 years. However, it is sad to note that, with the exception of a small number of film experts, the movie had been largely forgotten by the Korean public and was restored only after it received attention from others overseas.

When Korean films receive prizes at international film festivals, the Korean public pays attention. But we have failed to preserve the classic works that laid the groundwork for the current crop of award-winning films. I wonder how many more films like The Housemaid are sleeping in the archives.