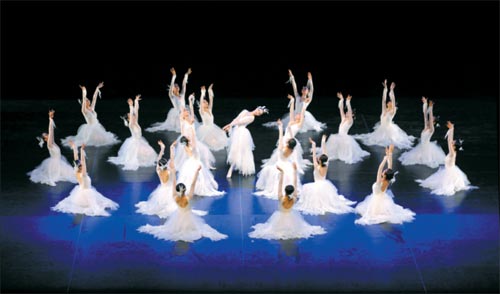 The Korean production of Swan Lake, which will be staged this weekend in Seoul, blends elements of traditional Korean dance with modern and ballet choreography. Provided by the organizer


“Swan Lake,” which is one of Tchaikovsky’s three ballet masterpieces, has been performed in many different versions by many different companies around the world for over a century since its premiere at the Bolshoi Theater in Moscow in 1877.

Two productions of the ballet have already been mounted in Seoul this month alone, each with its own defining characteristics.

One of the productions was customized for children. The other, by British choreographer Matthew Bourne, features an all-male corps de ballet and a man as the leading swan, a role that was originally choreographed for a female dancer. The Bourne version of the ballet is currently being performed in Seoul for the fourth time since 2003.

Perhaps the most anticipated production of the ballet, however, is the one set to go on stage this weekend. This Swan Lake is the first Korean version of the ballet created and it will be performed by the critically-acclaimed Seoul Metropolitan Dance Theater, which has a long history of using traditional Korean music and dance to bring Korean folktales to the stage.

The production blends elements of traditional Korean dance - including a sword dance, a flower dance and a fan dance - with more traditional ballet and modern dance choreography.

He chose to produce the popular ballet because he wanted to bring new audiences to Korean dance.

“Through our production, the audience will be able to see a brand new Swan Lake, where Korean dance, which is characterized by slow and pensive movements, harmonizes with the beautiful music of Tchaikovsky and a familiar story line,” he said.

The story will be set in ancient Korea in Manchuria, which is north of the Korean Peninsula. Like the original, the plot revolves around a pair of lovers. In the Korean version, the lovers are Prince Jigyu from the kingdom of Buyeon and Princess Seolgoni from the kingdom of Biryung. They are vexed by the chief of Mangang, a barbarian tribe. Echoing the original, the princess of Biryung will play both Seolgoni (the white swan Odette in the original) and Geomunjo (the black swan Odile).

“It will be interesting for the audience to see the dialogue between Western music and Korean dance,” Lim said.

Unlike the original, which had two acts and four scenes, the Korean production of the ballet will have one additional scene.