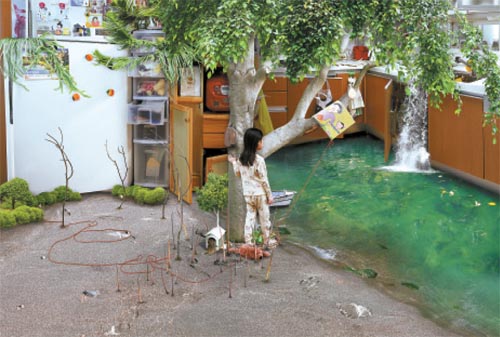 Many people recognize that photography is no longer just the representation of existing things, a concept that is sure to be reinforced with the ongoing exhibitions by two young artists who have very different approaches to photography.

One of the exhibitions is “My Age of Seven in 1978,” a solo show by Won Seoung-won, 38. It runs until June 6 at Gana Contemporary in Pyeongchang-dong, central Seoul.

The exhibit shows a series of photographs, which look like illustrations for a fairy tale, that tell the story of a little girl who wakes up one day to find that her mother is not at home. Perplexed and afraid, she set out on a journey in search of her mother.

“It is based on my own experience,” Won said when she met with a group of reporters at her studio in Jangheung, north of Seoul, last month before the exhibition.

Won created the surrealistic images in the photographs by combining pieces of real photos she took in various parts of the country.

“I never use existing images from the Internet,” she said. “I travel all around the nation to gather the exact images of houses, alleys, tree branches and other things that I want.” 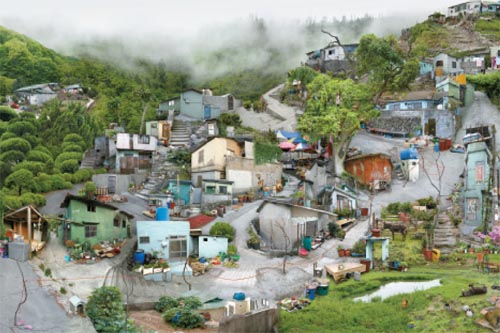 Won Seoung-won’s “My Age of Seven in 1978,” which is based on her own memories, expresses the subconscious fears children have about losing their mother in a series of photographs that look like illustrations for a fairy tale. In the photo on the top, a girl finds her mother gone with the kitchen abandoned. In the photo on the above, she wanders around looking for her mother. Provided by Gana Contemporary

Shin Bo-seul, a curator, said that one consequence of this process is that it takes a long time to make one piece.

“This explains why her photographs, even though they are digital, appear to be the result of detailed manual work. They even look like quilts that have been made by sewing different pieces of fabric together.”

The other of the two exhibitions is Lee Myoung-ho’s “Photography-Act Project,” which runs to June 6 at the Sungkok Art Museum.

At first glance, the images in Lee’s “Tree” series looks like a photo of a photo of a life-sized tree printed on a white screen in the middle of an empty field. But a closer look reveals that the tree is actually a real tree with a screen behind it.

In this way, Lee’s work is like an inverse trompe l’oeil. Instead of creating the optical illusion that a painting or print is real, as traditional trompe l’oeil works do, Lee’s works make viewers think that the real tree is a painting. 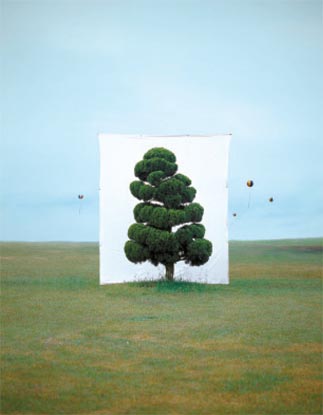 At first glance, “Tree #2” (2006) by Lee Myoung-ho looks like a tree-printed screen set up in a field. But, it is a real tree with a screen behind it. Provided by Sungkok Art Museum

Lee “makes us look at a tree in its natural surroundings, but separates the tree artificially from nature by presenting it on an immense white ground, as one would see a painting or photograph on a billboard,” Jim Casper, the founding editor and publisher of Lens Culture, an online magazine about contemporary photography, wrote. “His Tree series of photographs pose intriguing questions about representation, reality, art, environment and seeing.”

The exhibit also shows another series by Lee titled “Sea,” with photos of a vast canvas installed in the middle of a desert.