Lee adviser to run for assembly

Lee adviser to run for assembly 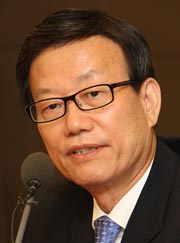 Yoon Jin-sik said that as soon as his resignation is accepted, he intends to step down to run for a National Assembly seat representing Chungju in North Chungchung province in a by-election slated to take place on July 28.

The seat has been vacant since Lee Si-jong of the Democratic Party resigned to run for North Chungchung provincial governor in the June 2 local elections. Yoon ran for the National Assembly in 2008 but lost to Lee.

“I decided to run because the development of Chungju, my birthplace, lags behind other cities across the country. I want to improve that,” Yoon said in an interview with journalists.

Political observers said Kang Man-su, first senior secretary for economic affairs in the Lee administration and chairman of the Presidential Committee on National Competitiveness, is a strong candidate to replace Yoon.

Yoon, a former commerce minister, was appointed the president’s senior secretary for economic affairs in January 2009. In August of that year, he was named to the additional post of chief policy director.

Yoon held both posts until March, when Choi Joong-kyung, ambassador to Manila, took over the economics post.