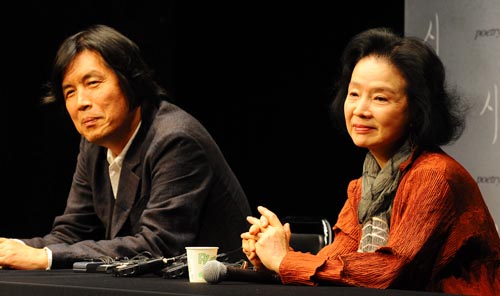 After winning the best screenplay award with his film “Poetry” at the Cannes Film Festival, director Lee Chang-dong (left) and actress Yoon Jung-hee speak about their experiences with the festival at a press conference in Korea on Wednesday. [NEWSIS]


Director Lee Chang-dong and actress Yoon Jung-hee arrived in Korea on Wednesday after their turn at the Cannes Film Festival, where Lee picked up the best screenplay award for his film “Poetry.”

Lee was bombarded with compliments from the foreign press and film industry officials. But he was rather self-deprecating when asked what made Poetry so successful at the festival, which came to an end on Sunday local time.

“Maybe it was because there weren’t any other good screenplays at this year’s festival. I believe that’s what made the jury choose me,” Lee said, without emotion.

He also talked about the pressure and anxiety that come with being part of a festival such as Cannes.

“I believe that every film has its own beauty and value, but it was a little stressful for me, and I watched the film festival as if it were the Olympic Games.

“I also didn’t like that I became a person who cares about results. I left Cannes on Sunday morning because being there [when the results came out] would have been too much for me, so I went to Paris with my family to meet friends.”

But Lee did admit there was one award he was watching closely - the best actress award.

“Everyone at Cannes was expecting Yoon to receive the best actress award,” the 56-year-old director recalled. “I know she gave everything she had while we were filming, and I thought it would be nice for Yoon to win the award.”

Yoon interrupted him to say, “I didn’t do my best just for an award. Your screenplay was so beautiful and I really wanted to bring the character you created to life.”

Yoon, who returned to film for the first time in 16 years to make this film with Lee, seemed to have enjoyed her experience at Cannes.

“I was so happy during the film festival because even total strangers approached me and complimented on my acting and the film,” Yoon said.

“One Russian film critic I met at an airport said she was angry because I didn’t receive the best actress award. For me, that kind of praise is the most precious of presents. I mean it.”

In the 60s and 70s, Yoon was the queen of the nation’s film scene. She now lives in France with her husband, pianist Paik Kun-woo, and has ventured only occasionally back to the world of film. Her last film before Poetry was “Manmubang” in 1994.

Still, she seemed pleased to be part of the film world again.

“For me, a film festival is a place where you can meet many talented directors, actors and actresses. Without Cannes, how could I have met Tim Burton?” she said, her voice rising with excitement.

When asked whether they would work together again, the response was positive.

“If possible, I’d like to work with Yoon again when she turns 80 or 90, when she has more wrinkles and salt and pepper hair,” Lee said.