Actor banks on his lucky charm

Actor banks on his lucky charm 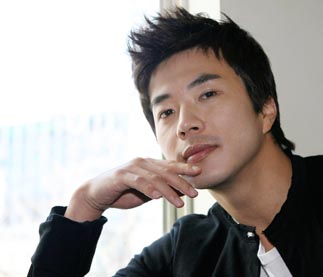 Actor Kwon Sang-woo is hoping his new film “71-Into the Fire” will help him mount a comeback with his fans. [JoongAng Ilbo]

Kwon Sang-woo, 33, was once one of the most eligible bachelors in the country, with a string of hit films and TV shows early in the decade. After seeing his popularity take a hit in recent years, he is now hoping to make a comeback with his role in the new film “71 - Into the Fire.”

In the movie, set to be released on June 16, Kwon stars as Koo Kap-jo, a 17-year-old student soldier fighting against the North Korean army during the 1950-53 Korean War.

But he was almost excluded from the cast.

“I almost wasn’t cast because I’m too old [for the role],” Kwon said with a laugh at a press conference held earlier this month in Nonhyeon-dong, Gangnam, southern Seoul.

Kim Seung-woo, who plays an officer from the South in the film, said that he, too, had concerns about the difference between Kwon’s real age and that of the character he plays.

“When I heard that Kwon was cast as a character who is the same age as [Choi] Seung-hyun, I was really worried because [Kwon] is around our age,” Kim said.

Kim said he changed his mind after filming began, adding his own bit of wisdom about the film’s chances for success.

“When we were in production, Kwon actually looked younger than [Choi],” Kim said. “And because no film in which Kwon has appeared wearing a school uniform has ever failed, I expect [this film will be a success].”

Oddly enough, the uniform has been something of a lucky charm for the actor. The movies in which he has appeared wearing a school uniform have indeed been successful.

Kwon even talked about the phenomenon at a press conference last March, saying, “So far, the movies that I’ve made in which I have to wear a school uniform have done well.”

In the movie “My Tutor Friend” (2003), Kwon stars as a high school student and spends much of the movie in uniform.

For his role in the film, a romantic comedy, Kwon received best new artist awards at both the Daejong Film Awards and the Baeksang Arts Awards, which is a major film and arts awards ceremony in Korea.

And in “Once Upon a Time in High School” (2004), Kwon plays the leading character, Hyun-soo, a high school transfer student. The film attracted more than 3 million viewers and won critical acclaim for its realistic portrayal of school life in the 1970s. For his performance, Kwon again received an acting award at the Daejong Film Awards that year.

According to statistics from the Korean Film Council, My Tutor Friend attracted 4.9 million viewers and Once Upon a Time in High School attracted 3.1 million. Considering that total attendance at the movies nationwide was about 64 million in 2003 and 80 million in 2004, that’s enough to classify both films as hits.

With or without the uniform, Kwon’s success continued for most of the rest of the decade. He appeared in movies and TV dramas that became popular in both Korea and Japan.

But his popularity started to wane due to a series of scandals that emerged before and after his marriage to actress Son Tae-young in 2008.

He said his TV endorsement contracts also started to disappear. Before he got married, he had an average of seven TV commercials per year, but by early 2009 that number had dwindled down to zero.

Still, Kwon feels confident that his new film will help him regain his popularity.

“I’m predicting audiences of 10 million,” he said at the recent press conference.