The qualities of leadership

The qualities of leadership 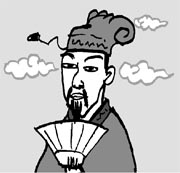 “What does it take to be a general?” Zhuge Liang asked.

“It must be someone who knows how to command an army, deploy troops and launch a military attack,” Lu Shu replied.

“You only mentioned the talents required of a general,” Zhuge Liang said.

“Tell me what you think is required,” Lu Shu said.

“An ordinary general talks only about the number of soldiers and whether they are brave enough to fight. But a good general can see beyond that. He studies the time and season, knows the merits of geographical location and understands his people. He also enjoys games,” Zhuge Liang said. “In battle, there are enemies both visible and invisible. If a general is good at managing the sun, the moon and the stars, while also handling the wind, the clouds, water, fire, mountains and streams, he has a chance at defeating a large army.”

Students in the executive MBA course at The Chinese University of Hong Kong were once asked to study and respond to the above conversation. This is the discussion that followed:

Student A: The number of soldiers and their bravery represent the assets of a business and the educational background of its employees. The sun, moon and the stars are the software.

Student B: Zhuge said a good general understands his people. A CEO, like a military commander, must be responsible not only for his people, but also his opponent and those caught in the middle.

Student C: The most important thing for a general is that he enjoy games. To enjoy playing a game, you have to respect the rules. Even more important is that you enjoy the process of learning. Most importantly, you cannot pursue victory all the time. One strategy is to allow for defeat in order to achieve victory later. The teachings of Zhuge Liang are that we should learn both victory and defeat to be a good leader.

Student D: I was interested in what he said about the “invisible enemy.” I wonder whether real leadership lies in the ability to transform uncontrollable elements into those that can be controlled.

Professor: You have all made good points. Now, let’s look at Zhuge Liang himself. He is a strategic planner. He was successful because he had patience, like a dragon in hiding before his ascension. Then, he set a high price for his services. If the price had been too low, no one would have believed in his ability to get the job done.

When U.S. Secretary of State Hillary Clinton had an interview with Phoenix Television in Hong Kong during her recent visit to Beijing, she received a clay toy called “Woman Zhuge Liang.” It is one of the highest compliments that can be paid to a foreigner.

Where is our Zhuge Liang? What we need in the current crisis is a leader who understands the people and also enjoys playing the game.