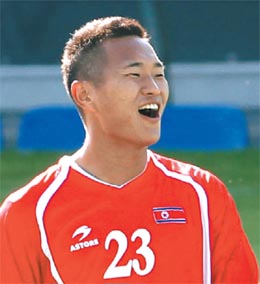 TOKYO - North Korea’s World Cup campaign is reinforced by a soldier of fortune, J-League striker Jong Tae-se, who was born and bred in Japan but could have played for the North’s political foes South Korea.

He holds South Korean nationality like his parents, descendants of immigrants from colonial Korea. But he managed to obtain a North Korean passport after growing up at patriotic pro-Pyongyang schools in Japan.

“The South Korean people may feel regret,” he told Japanese media about his absence from their team. “At the same time, they have a deep-rooted wish for national reunification.

“They seem to compare me to [Manchester United winger] Park Ji-Sung in the South,” added Jong, nicknamed Asia’s Wayne Rooney or “the people’s Rooney” for his combative style.

However complicated his background may be, his target in South Africa is clear - to help North Korea shock the big guns again as they did in their only previous World Cup in 1966. In one of the biggest upsets of all time, North Korea shamed Italy 1-0 before going down 5-3 to Portugal in the quarterfinals 44 years ago in England.

“After having beat the odds to win a ticket, we also want to produce results that will stun the world,” said the stocky 26-year-old ahead of the “Group of Death” campaign against Brazil, Portugal and Ivory Coast.

“Our aim is to advance from the group round and I will aim to score a goal in every match for three goals.”

“I want to play overseas in the future,” added Jong, who has played for Kawasaki Frontale since his graduation from Tokyo’s Korea University in 2006.

“Our game against Brazil or Portugal will draw worldwide attention. If I impress and produce results, I guess offers will come naturally.”

After his debut with doggedly defensive North Korea in 2007, Jong has scored 14 goals in 21 internationals with his skills in brushing off defenders and holding up the ball. He bagged a brace in a 2-2 friendly draw with Greece in Austria last week. He is joined in the frontline by Hong Yong-jo, who plays for Russian side Rostov.

North Korea has two other Japan-born ethnic Koreans and J-Leaguers - Omiya Ardija midfielder Ahn Young-hak and Vegalta Sendai midfielder Ryang Yong-gi. Ahn, 31, has played for North Korea since 2002 and even plied his trade in South Korea with K-League clubs Busan and Suwon without falling out with the North’s football association. Ryang is on the back-up list.

Jong and Ahn have each played in about a dozen of North Korea’s 16 World Cup qualifiers as the country survived a tough final round against Asian rivals Iran, Saudi Arabia and South Korea.

“It has taken a lot to accept their culture,” Jong said of his teammates.

“They got curious about my cell phone. When I let them use it, it changed hands among all of them. Such small matters stressed me.

“But they are dead serious and pure when it comes to football. They have grown remarkably and their minds are like sponges.”

Ahn and Ryang were born into families which remained loyal to the North after the Korean peninsula was divided after Japan’s 1910-1945 colonial rule. The trio are among 14 Koreans in Japan who have been called up by the communist North for international duty since Kim Gwang-ho in 1980.

“Jong and Ahn add good accents in there,” he said. “Other players are closely watching how they manage themselves. There will be a number of players who will play abroad after the World Cup.”