Away from the bikers and hikers, a humble avian refuge

Away from the bikers and hikers, a humble avian refuge 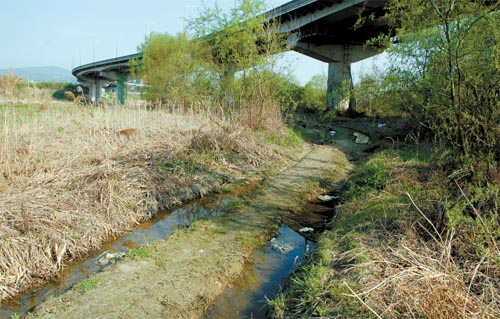 The final team started their exploration at 10 a.m. along Tan Stream (Tancheon in Korean) near the eastern end of Han River, near Bokjeong Station, subway line No. 8. Tancheon is a narrow waterway bustling with people, who come to take walks or ride their bikes.

“The special bike roads were established as an environment-friendly project as more and more people use bikes as a means of transportation,” said Lee Byung-woo, a member of the Wild Animal Group accompanying the team. “But such roads are in fact harming the environment as they become a barrier blocking wild animals from going down to the stream.”

Luckily, the western part of the riverbank has no bike roads, or even hiking trails. So we had to find our own way. Soon we came upon a plover bird bathing in a little pond, left after rainfall a few days earlier. Later, a magpie dropped down from the trees to quench its thirst.

After only 10 minutes of walking along the western part of the river, the team saw a Korean crow-tit. As this bird is used in one Korean proverb for its short legs, the team could not help but focus on its legs. And the proverb was indeed true. 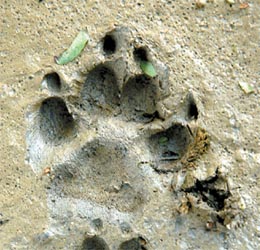 The Tancheon area is home to birds small and large: auks, mandarin ducks, rock thrushs, herons and snipes - a rare sight in Seoul. The team saw more than 10 different kinds of birds in the morning alone. A little egret was even seen bathing in the middle of the river. A few minutes later, it caught a fish.

Lee said that there were two reasons birds seem to gather in Tancheon. “Birds love this place not only because water and prey are relatively abundant, but also because there are sand islets in the middle of the stream.”

A sand perch is in fact a perfect spot for a bird to stand and look for food, while protecting themselves from natural enemies such as cats. Through binoculars, a snipe and a white-faced wagtail could be seen drinking water while standing on one such sandy refuge.

Except for a dead raccoon, we didn’t see any mammals. But we did see raccoon excrement accumulating in one area, showing that the species still seems to be thriving. Raccoon footprints were also visible, with the characteristic four toenails. One of the members said that the area could be a habitat for a raccoon family, because of the presence of the carcass, excrement and footprints.

The team ended our explorations after finding a skull of an animal that appeared to have come from a wildcat.