Hong Sang-soo finally lets his characters have a laugh

Hong Sang-soo finally lets his characters have a laugh 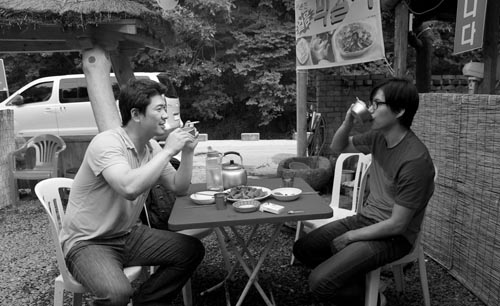 After more than 10 feature films, it seems director Hong Sang-soo has finally learned to laugh out loud, instead of the occasional, sarcastic snicker. In his latest effort, “Ha Ha Ha,” Hong, always the elegant satirist, seems to have lightened up a bit, or at the very least, made an effort to do so.

The backdrop for “Ha Ha Ha” doesn’t differ greatly from his previous films. Hong’s signatures - the cowardly intellectuals, travel to a regional area in Korea, chance encounters with flighty women and existential questions about romantic love over soju or makgeolli (Korean rice wine) - are all there.

This time, however, the venomous sting in the characters’ jokes seems to have disappeared and they no longer seem as angry. Even the visuals have become sunnier, as the camera frequently lingers on a bright, emerald-colored sea and lustrous shots of the rural city of Tongyeong with a kind of warmth that was quite hard to find in other films by the director.

The film unfolds over a drinking session between Mun-gyeong (played by Kim Sang-kyung), a film director, and Jung-sik (played by Yu Jun-sang), a film critic, as they talk about their summer trips and realize that they were both in Tongyeong. Over a few bowls of makgeolli, they share anecdotes of their encounters with women and Mun-gyeong’s mother, who runs a restaurant there.

During their talk, the audience finds out that while the people they met in Tongyeong are interrelated, the two men never bumped into each other. Their intertwining stories bring out an interesting premise for the movie in dealing with the relationship between memory and perception, which is further driven by the contrast between the black-and-white shots of the drinking session and the color shots of the story that unfolds in Tongyeong.

The women in the film, Yun-ju (played by Yeh Ji-won) and Sung-ok (played by Moon So-ri) are one of the best parts of the film. Unlike many female characters from the director’s previous films, these two women were people I would love to go to lunch with. Throughout their misadventures with the men, they never succumb to being unrealistic, glossy versions of women. Both are laid-back while sometimes being neurotic, honest and funny, forgiving and self-deprecating.

A line during the first part of the film sets the tone for the movie, in which Mun-gyeong says, “Be aware of the dark and sad. The greatest evil lies inside them.” Yes, Mun-gyeong loses Sung-ok to her ex-boyfriend and Jung-sik takes anti-depressants as if he were taking vitamins. They, like all of us, get tangled up in things they don’t want to be faced with, but this time, Hong shows us that they can at least laugh about it sometimes.