Engines fuel artists in the era of industry

Engines fuel artists in the era of industry 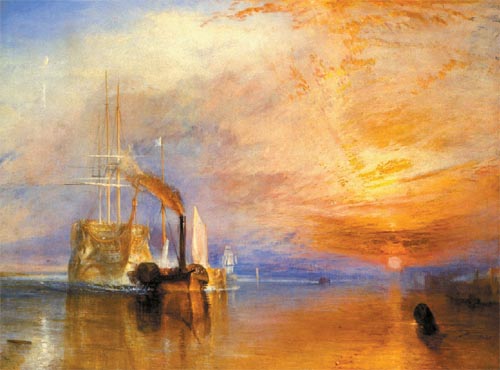 A painting by J. M. W. Turner (1775-1851) shows a grand ship with its sails down being towed by a smaller black steamer, with the sky and the water glowing red and gold in the sunset. The title of the work by the English master of Romantic landscape painting is “The Fighting Temeraire.” But which ship is the Temeraire? The painting’s original title is “The Fighting Temeraire Tugged to Her Last Berth to be Broken Up.” Therefore, the Temeraire must be the sailing ship, which looks majestic but pale.

According to the National Galley to which the painting belongs, the warship Temeraire played a distinguished role in Britain’s victory at the Battle of Trafalgar in 1805, which finally brought about the fall of France’s Napoleon Bonaparte. But even the warship, which had been loved by the British people for its distinguished military service, was finally decommissioned in 1838. Turner happened to see the old warship being towed to be broken up near the River Thames estuary and made sketches of it, which he then worked into the painting.

The setting sun seems to tell of the warship’s past glory and its present downfall. The shining veil of golden clouds made by the sunset looks just like a last salute for a passing war veteran. And the flaming smoke that the steamer belches contrasts with the last light of the sunset, declaring the beginning of a new era. 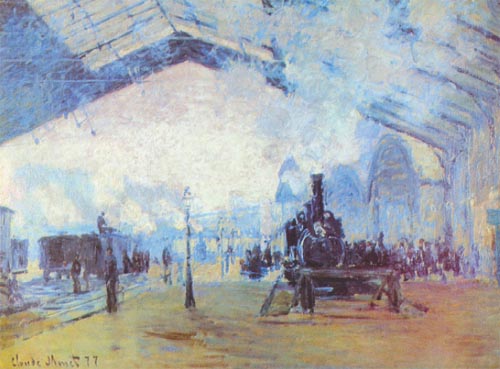 Although the painting represents a real scene, it looks symbolic, because it would be difficult to present a more dramatic representation of the decline of an old era and the rise of a new epoch than this painting does. Turner’s work vividly shows the changes wrought by the Industrial Revolution in Britain.

In broad sense, an “industrial revolution” is a transition from an agriculture-oriented economy to an industry-oriented economy in any period and any region. But in a narrow sense, it refers to the period of industrialization and the following socioeconomic and cultural changes in Britain that occurred between 1780 and 1840. The driving force behind the epochal change was the development of steam power, which was used to fuel the tugboat in Turner’s painting, and other technologies.

Of course, steam power was not the only thing that turned a society that depended mainly on agriculture and cottage industry into a society led by machine industry. Conditions for the change were being made in Britain in the 18th century. The feudal guild system was turning into the factory system, while petty farmers, who had become part of the landless working class due to enclosure processes, were rushing to work in the cities. In addition, raw materials including cotton were flowing into the country from the colonies, while its overseas markets were expanding.

Against this backdrop, new cotton spinning machines were invented in the late 18th century, launching the factory era in Britain. That was followed by development of iron manufacturing, which was needed to supply iron used for machinery manufacturing, and expanded use of coal, which was needed for iron manufacturing. Also at this time, James Watt (1736-1819) invented a modern version of the steam engine. The engine enabled operation of large-scale machines and gave birth to steam ships and steam locomotives. 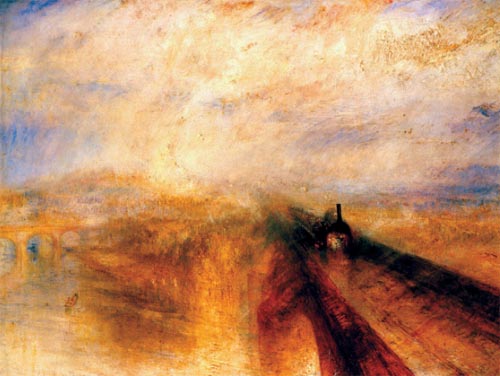 How did the artists of the time receive such great changes? Some critics say that The Fighting Temeraire reflects the artist’s nostalgia for great old things and an antipathy for the new machine civilization. They say that the sailing ship Temeraire, with its high masts, is depicted as noble and spiritual, while the black steamer tugging it is portrayed low and earthly.

But another masterpiece by Turner, “Rain, Steam and Speed - The Great Western Railway,” goes against this theory.

It is said that Turner did not make the painting upon seeing the locomotive, but visualized his experience of a train and then shifted his perspective to outside the locomotive.

At that time, many British people would go for train rides just to enjoy the speed of the new mode of transport and the surprising scenery from the carriage windows.

According to John Ruskin (1819-1900), an art critic and support of Turner, the artist, who was already nearing the end of his life in the 1840s, took a ride on a steam locomotive one day during a rain storm. The scenery from the carriage window must have been continually changing and shaking due to the train’s speed, and he must have seen the scenery swirling in the wind, the rain and the light. He is said to have poked his head out the window to feel the speed of the wind, which sparked his senses and inspired him to create the innovative painting.

The exaggerated foreshortening of the railway in this painting heightens the feeling of the speed of the train, the hero of this work. The vibrating headlights of the locomotive slice through the mists and the rain streaks in speedy strokes, making the train’s approach so vivid that viewers can hear the roar of the steam engine as it cuts through the night air.

The work’s great sense of the speed of the train is made possible by Turner’s attention to the dynamic force of energy as well as his ability to visualize it in motion. The time in which the work was made is also important to note, as the Industrial Revolution heightened the speed of everything.

Peter Borscheid, a German sociologist, wrote in his book “Das Tempo-Virus” that the Industrial Revolution was a revolution of speed. That includes not only the speed of new forms of transportation but also the speed of production and operation, which was accomplished through the streamlining of industrial processes such as division of labor and the introduction of machines, he said.

Borscheid’s comments bring to mind the work of Adam Smith (1723-90), the Scottish philosopher widely regarded as the father of modern economics. Against the mercantilists, who believed that wealth came from the acquisition and accumulation of precious metals such as gold and silver, Smith said in his classic book “The Wealth of Nations” that the source of wealth was labor and that wealth could be increased with improvements in productivity. And those improvements would be achieved through the division of labor, he said.

Borscheid said that the changes to speed in the Industrial Revolution also gave birth to the speedy strokes used by the French Impressionist artists such as Claude Monet and other artists of the period. Like Turner, these artists were interested in trains and stations as subjects, but I will talk about them in a future column.