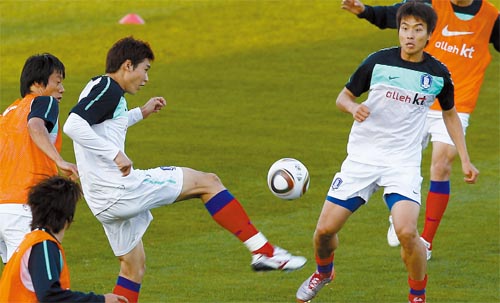 Lee Dong-gook, right, attempts to gain possession of the ball during a scrimmage yesterday at the Olympia Park stadium in Rustenburg, South Africa. [YONHAP]

RUSTENBURG, South Africa - Lee Dong-gook, the South Korean national team forward who recently suffered a hamstring injury, is recovering fast and may be put into play in the opener at the World Cup group competition, the team’s coach said Monday.

“Lee has improved a lot. He may even play a little during the group opener with Greece,” manager Huh Jung-moo told reporters ahead of the team’s training session at the Olympia Park stadium in Rustenburg, near Johannesburg.

Nicknamed the “Lion King,” Lee, 32, of the Pohang Steelers, was the top scorer in the Korean Football League last year.

At age 19, the forward made the national squad for the French World Cup in 1998 but was dropped from the 2002 finals after failing to win the heart of then-manager Guus Hiddink. In 2006, Lee led the national team in the Asian qualifiers but misfortune struck again as he injured his knee right before the German World Cup finals.

South Korea plays its first game on Saturday against Greece, followed by Argentina on June 17 and Nigeria on June 23.

In 2002, the South Korean team advanced to the semifinals when the country co-hosted the tournament with Japan, but it has yet to reach the knock-out round in away games.

Huh previously said that Lee would be able to play at least from the second match, against Argentina.

The manager said all of his players are adjusting well and are in good shape. The team’s spokesperson, however, told reporters Sunday that center back Cho Yong-hyung has contracted shingles, a virus related to chicken pox, and has been excused from training.

The team conducted tactical training Monday. When asked what he emphasizes in tactical drills, the South Korean manager said the key to landing goals is to tear down the opponent’s defense.

Meanwhile, in a poll conducted by public TV station KBS last week, more than 87 percent of 8,815 people predicted South Korea’s team will reach the second round.

Sports Illustrated, a well-known sports magazine in the United States, backed this forecast in a column last week, predicting that Argentina and South Korea will survive the group round and join the last 16. The encouraging prognoses have added to the festive mood among the Red Devils.

Nearly half of the financiers in Hong Kong believe that South Korea will outperform other countries in the Asia-Pacific region in the upcoming World Cup, an online poll showed yesterday.

According to the survey of financial people working in Hong Kong conducted last week by the monthly publication Finance Asia, 49 percent of respondents chose South Korea as the best among the Asia-Pacific teams, beating Australia, Japan, New Zealand and North Korea.

An additional 26 percent voted for Australia, while Japan received 13 percent of the vote, the survey said.

New Zealand and North Korea are the two lowest-ranked teams at the World Cup and got little support from the financiers, with just 8 percent and 5 percent, respectively.

The publication did not disclose the number of respondents in the poll.

South Korea stunned the world when it advanced to the World Cup semifinals in 2002, when the country co-hosted the quadrennial tournament with Japan. It has yet to reach the knockout round on foreign soil.

South Korea has so far competed in six consecutive World Cup contests, from 1986 in Mexico to 2006 in Germany.