Red Devils ready to fire up the Cup

Red Devils ready to fire up the Cup 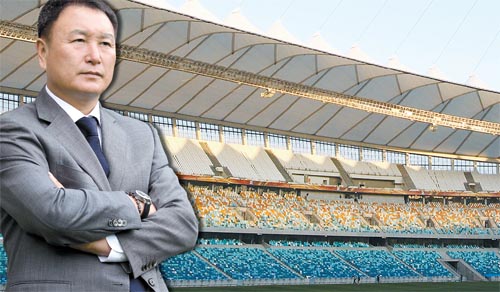 The 2010 South Africa World Cup will be a tournament of firsts.

Fittingly, then, the Korean national team is gunning for a first of their own.

Although it reached the semifinals in the 2002 Korea-Japan World Cup, South Korea has never made the round of 16 away from home. As the team gets ready for their seventh consecutive Cup bout, manager Huh Jung-moo and his men have their eyes firmly set on the knockout rounds.

As the lowest-ranked team in Group B, Korea will have their hands full. 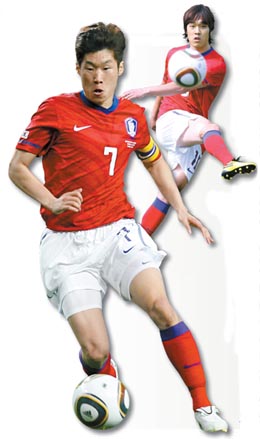 What the national team has going for them is a good mix of young and talented players and veterans including six from the 2002 squad. Also, the current team boasts 10 overseas players, the most ever for South Korea. It’s one of the reasons why the current national team has been tabbed by many to be the most talented squad assembled to date.

“The 2002 squad had a home-field advantage. We had an extended training camp which led to great teamwork,” current Olympic team manager and 2002 team captain Hong Myung-bo said in a recent interview. “The current squad has more experience. The veterans on the team have the experience of reaching the semifinals at the 2002 World Cup, and even the younger players have earned valuable international experience.

“When comparing the skill-set level of the two clubs, the current team is much better.”

Leading the pack are Park Ji-sung of Manchester United, Park Chu-young of AS Monaco, Lee Chung-yong of Bolton and Ki Sung-yueng of Celtic FC.

Coming off his second season with AS Monaco, Park Chu-young recorded nine goals and three assists in 22 appearances, and has developed into a capable forward with the potential to do even better.

Park Ji-sung, the team captain, is the team’s heart and soul and can be utilized as a left winger or center midfielder. Huh first chose Park for the national team at the 2000 Sydney Olympics. Park has since recorded 12 goals (two at the World Cup) in 88 international appearances.

Flanking the right wing position is Lee Chung-yong. Showing impressive dribbling and passing skills, Lee racked up five goals and added eight assists for Bolton in his rookie season in the English Premier League. Ki is the center midfielder, who controls the flow of matches and often contributes on the attack.

“In leading a group made up of overseas-based players like Park Ji-sung, Lee Chung-yong and Park Chu-young, Huh has the speed and talent at his disposal to compete on an international level,” said KBSN football analyst Kim Dae-gil. “Even when comparing the current team to the 2002 squad, they are ahead on almost all counts.”

The mastermind of the team is Huh, the manager. Since taking control of the national squad for the third time in December 2007, Huh has done a complete overhaul by infusing young talent into the roster and naming Park Ji-sung team captain in October 2008. From February 2008 to October 2009, Huh’s squad went undefeated in a stretch of 26 matches, posting 14 wins and 12 draws.

Huh has also adopted a softer approach this year than in the past. Leaving behind his reputation as a disciplinarian, Huh has been a supportive and understanding leader in the locker room.

One big obstacle for the national team came at the East Asian Football Championships in February, when South Korea lost to China, 0-3, for the first time since the two sides started playing each other in 1978. With Huh under heavy criticism and with a big rivalry match against host country Japan coming up, it would have been understandable - if detrimental to team morale - if he’d let loose a tongue-lashing followed by a punishing practice.

Instead, Huh did not single out any player to blame for the loss, and canceled practice the following day to give his men time to reflect. The team went on to win its match against Japan 3-1, and put together a string of confidence-boosting matches against the likes of Ivory Coast, Ecuador and Japan. Huh would follow the same pattern after the discouraging 0-1 loss to Belarus earlier this month. After being physically dominated by the East European squad and losing center defender Kwak Tae-hwi to a knee injury, Huh gave his players a day of rest and took them on a trip to Stubaier Gletscher. The trip was closed to the media, but Korea Football Official Lee Won-jae offered insight into how Huh addressed his men at the Austrian ski resort. “Huh told his men to think of the loss as a learning experience and to always remember to place the team ahead of personal goals,” he said.

With an energetic and talented group of young players at his disposal, the team’s chances of reaching their collective goal look to be within grasp.