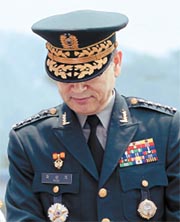 The military leadership’s reactions on the night of the Cheonan’s sinking in March were shoddy and sloppy and it tried covering up its bungled crisis management, according to an audit board investigation announced yesterday.

Not only was the military unprepared to counter a provocation, it also omitted a crucial piece of information about a suspected torpedo attack when reporting the incident up the chain of command, the Board of Audit and Inspection said in its report.

The report criticized the military’s slow and flawed responses and its careless disclosure of confidential information.

The board said it was only releasing parts of its conclusions that don’t compromise military secrets, a possible indication that additional mistakes were not being made public.

“Our probe revealed a series of problems in the Defense Ministry’s and the military’s handling of the incident, including the lack of a combat-ready posture, reporting system, crisis-response measures and management of military confidential information,” the board said in a press release.

In its report, the audit board urged the ministry to reprimand 25 top military commanders including Lee Sang-eui, chairman of the Joint Chiefs of Staff, for failing to react properly after the Navy warship Cheonan sank on March 26.

An investigation by international experts concluded in May that a North Korean submarine’s torpedo attack sank the warship. Separate from that probe, the Board of Audit and Inspection launched an investigation into the military’s response.

The board said yesterday that the military assessed in November there was a high possibility of a North Korean submarine infiltration in the northwestern waters following the North’s defeat in a naval clash in 2008. Despite that assessment, the military did nothing to guard itself from the attack, the probe concluded.

The Second Fleet Command had also obtained intelligence about North Korean submarines’ movement days before the incident but took no precautionary measures, the audit board said.

The board also revealed details about another combat patrol’s firing at an unidentified target in the waters near the Cheonan’s sinking. While the board did not conclude what the target was, the report said the Sokcho vessel informed the Second Fleet shortly after the incident that it had fired toward what was suspected to be a North Korean semi-submersible. The Second Fleet, however, ordered the Sokcho to report to upper authorities that it had fired at a flock of birds.

“During our inspection, we obtained testimony from an official of the Sokcho,” said Park Si-jong, director of the Government Administration and National Security Audit Bureau of the Board of Audit and Inspection.

“In its initial report, the Sokcho told the Second Fleet that it found the unidentified object around 10:56 p.m. and opened fire from 11:01 to 11:06 p.m. to destroy it. Around 11:13, the object disappeared,” Park said. “The final report issued at 2:51 a.m. the next day, however, said the Sokcho fired at a flock of birds. The Sokcho revised its report because the Second Fleet later ordered the correction.”

The probe also showed that the military’s reactions after the sinking were extremely sloppy. The Second Fleet Command received a report from the Cheonan about the incident at 9:28 p.m., six minutes after the attack. The command, however, took 17 minutes to report the situation to the Joint Chiefs of Staff.

The Cheonan also informed the Second Fleet Command that it had apparently been hit by a torpedo, but the fleet did not inform the Joint Chiefs of Staff and the Navy Operations Command, the audit report said.

The board said the Defense Ministry also gave a false report to its minister that it had called for a crisis management team, which it had not. The military also failed to assume a combat-ready posture, although they were required to do so after such an event.

The board said the military’s flawed announcements to the media fueled public confusion.

A significant number of top military secrets were also made public by the military in the aftermath, according to the board. Some were leaked to the media, while others appeared in press releases, the inspection report said.

The Defense Ministry said yesterday that the audit report will be taken into account when a military reshuffle takes place next week.