COEX stores may close for G-20

COEX stores may close for G-20 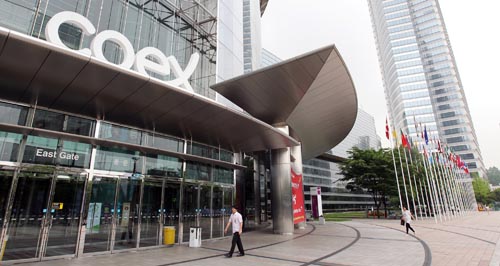 Stores in the COEX Mall, located beneath the COEX Convention Center, may be forced to shut down during the G-20 meetings. COEX said yesterday that nothing is official and some stores are considering voluntary shutdowns. [YONHAP]


Shop owners in and around COEX are reportedly considering a plan to shut down all the shops between Nov. 8 and 12, as Seoul prepares to host the G-20 Summit from Nov. 11 to 12.

“Nothing official has been said yet, but store owners are all expecting to be forced to shut down for at least two days during the G-20 meeting” said Huh Hun, the president of COEX’s store occupant association.

With the terror alert level in Korea raised since the sinking of the Cheonan, the government and COEX are said to favor temporarily closing down businesses in the area option to ensure security.

COEX Mall in Samseong-dong, southern Seoul, has an average of 100,000 visitors per day. As one of the largest commercial and business areas, it contains everything from office buildings and hotels to department stores. Four hundred and sixty stores operate within the COEX Mall, and there are 1,150 stores within the COEX area. In addition, COEX is a frequent host of large meetings and conventions.

According to the JoongAng Ilbo, shop owners in the COEX Mall were asked to cooperate with COEX and the government’s request to “volunteer” to shut down for the few days during the G-20 meetings.

The government reportedly asked Hyundai Department Store to shut down for five days, and others were requested to plan to shut their doors for given two to five days.

In a press release yesterday, COEX said it has not forced anyone to do anything and nothing is official.

Asked whether COEX had recently told 300 of its store representatives to voluntarily shut down, spokesman Ryu Tae-sung said, “It was a meeting that we have every month and the main intention was how to improve services to our customers.” As to whether businesses that do shut down will be compensated for lost trade, he said, “We will do our best to aid any discomfort, but we think that a lot of the stores are willing to voluntarily shut down for the success of the event.”

Huh said compensation was unlikely. “Our contract is renewed every year, and it clearly states that owners cannot ask for any kind of compensation. Also, with the increased security, it’s likely that sales will drastically decrease even if we open during that period.”

When Pittsburgh, Pennsylvania, held the G-20 meeting last September, most government offices, banks and stores as well as a large number of area businesses closed. However, the city did its best to secure cooperation for the increased security measures, with the mayor actively seeking help for a successful G-20 meeting.

In various interviews with the JoongAng Ilbo, many store owners said they believe security issues will force a “voluntary” shutdown, and they are unhappy that they will lose business - in some cases, as much as 50 million won ($40,900).