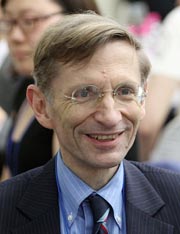 “There is no greater force in the world than an idea in the hands of a great entrepreneur.”

So said Bill Drayton, CEO and founder of the Ashoka Foundation. By “idea,” he did not mean merely a lucrative business model, but a way to help those in need and contribute to the common interests of society while continuing to make a profit. In short, he meant the ideal social enterprise.

Widely recognized as a pioneer of social entrepreneurship, Drayton attended the International Conference on Social Entrepreneurship 2010 jointly hosted by the Korea Development Institute and Korea University on June 3. Drayton heads the Ashoka Foundation, a social venture fund founded in 1981 that selects, educates and supports social entrepreneurs.

“What defines the true social entrepreneur is that he or she simply cannot come to rest in life until his or her vision has become the new pattern society wide,” he said.

A member of the audience asked Drayton’s opinion on Samsung Electronics Chairman Lee Kun-hee’s so-called “genius management” philosophy, derived from his “a single genius feeds ten thousand” comment. Drayton’s thoughts were measured. He emphasized the social entrepreneur’s ability for empathy. According to Drayton, deep empathy is highly infectious, inspiring many to follow and become “change-makers” who seek to improve the world.

In Drayton’s conception, those who agree with a social entrepreneur’s idea and put it into practice become the change-makers of their surroundings, and they in turn become models for their work colleagues, family or neighbors to beget the next generation of change-makers. It is his wish that in the end, the entire society will consist of change-makers.

Another main theme of Drayton’s speech was children. “Every young child should master and practice empathy,” he said. “Without early training in empathy, it’s hard for them to grow to become change-makers as adults.”

Drayton’s organization helps social entrepreneurs promote their ideas regardless of location or field. In the past 30 years, 2,100 Ashoka fellows have been selected for support.