Korea-Argentina game is a rematch for the managers

Korea-Argentina game is a rematch for the managers 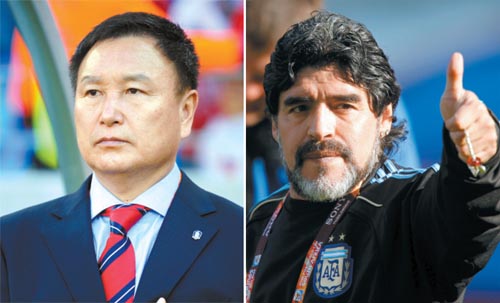 Huh Jung-moo, left, and Diego Maradona each led their teams to wins in their 2010 South Africa World Cup Group B opening matches on June 12. [NEWSIS,AP/YONHAP]

It will be a reunion of sorts for the managers of the Korean and Argentine national teams when they face off in Johannesburg tomorrow. Huh Jung-moo and Diego Maradona first went head-to-head at the 1986 Mexico World Cup Group A opener, but this time around they are meeting under very different circumstances.

In their previous meeting, a 31-year-old Huh and his wide-eyed Korean teammates - making their first World Cup appearance since the 1954 Switzerland tourney - went up against Argentina in the sweltering Mexican heat at Olimpico Stadium in Mexico City on June 2. The South American powerhouse was led by Maradona, then a 25-year-old superstar in t his prime, who was trying to make up for Argentina’s early exit from the 1982 World Cup. Maradona and La Albiceleste were favored to win the whole tournament in 1986.

The visibly nervous Korean squad allowed two goals in the first half as manager Kim Jung-nam decided to focus on defending Maradona, a strategy which freed up other players on the Argentine squad. Kim ordered Huh to shadow Maradona, and Huh used every trick the rule book allowed to slow the gifted midfielder.

“We gave up two easy goals in the first half but as a team, we made a vow not to lose the game like that,” Huh recalled Monday in an interview with the Korean press in Rustenburg, South Africa. “We were able to play better in the second half. If we hadn’t been nervous in the first half, we could have played better.” 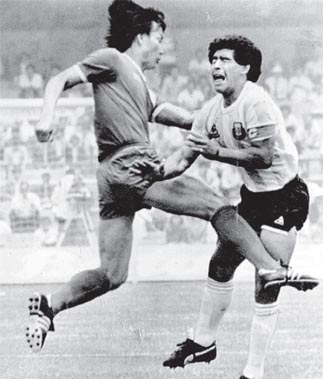 One of the lasting images from the game is of Huh kicking Maradona hard in the left thigh, and the Argentine captain’s face screwed up in pain. To slow down his opponent, Huh made rough tackles throughout the second half that left Maradona shaking his head in disbelief.

“I did not expect the Korean players to come out playing such a physical game,” Maradona said at the time about his team’s 3-1 win. “It was not an easy game, but we won. Korea did not just stick to playing football, they used taekwondo.”

Maradona was not the only critic. The Korean players, who were described at the time as “outsiders” and “nervous underdogs” by the Associated Press and Agence France-Presse, came under heavy fire by foreign and local media alike for their rough tactics.

Korea would go on to finish the tourney with one draw and two losses, while Maradona and his “Hand of God” goal carried Argentina to its second World Cup title.

Fast-forward 24 years and the two players who donned tight uniforms in the outdated photo are once again the central figures of the upcoming match between Korea and Argentina.

The quality of Korean football has noticeably improved since 1986. In his third stint as national team manager, Huh is steering a well-organized, disciplined and determined group. Leading the team is Huh’s most trusted midfielder and captain, Park Ji-sung.

Maradona, on the other hand, is coming off a dark period in his life during which drug abuse threatened to ruin the former superstar for good. The unproven and sometimes erratic rookie manager is now looking to prove himself all over again as a coach, attempting to become the first man to win the World Cup as a player and manager since Franz Beckenbauer of Germany.

Leading the Argentines this time around is another undersized but gifted midfielder, Lionel Messi.

Argentina is again ranked among the top squads in South Africa, but Korea has shed its “nervous underdog” label. Park can also be counted on to shadow Messi tomorrow. Since Huh selected him to the 2000 Sydney Olympic squad, Park has developed into one of Asia’s top players.

Coming off his sixth season with Manchester United, Park has faced off against Messi and Barcelona FC three times in the UEFA Champions League with some success. Park and his teammates are confident about their chances and look eager to prove their worth against a star-laden squad.

“Previous meetings are meaningless,” Park said in an interview with the JoongAng Ilbo. “Much like Patrice Evra and I worked together to contain Messi in the past, it will take a team effort on Thursday.

“If we keep in mind the way we played against Spain earlier this month, we can pull off an unexpected result.”

Messi and his teammates sounded less concerned about their opponents than about playing up to their capabilities at a press conference on Monday.

“I don’t know Korea well but they are very fast. I respect the Koreans,” Messi said. “Having said that, Argentina’s only rival is Argentina.”