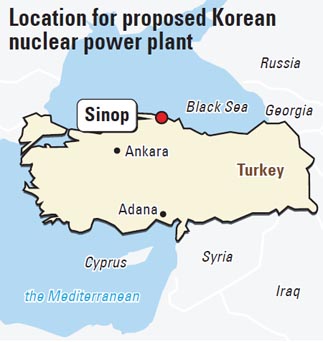 Prospects increased yesterday that Korea could win its second big overseas nuclear plant contract after Seoul signed a memorandum of understanding with Turkey to cooperate on nuclear power projects.

Turkey is expected to award a $10 billion nuclear power contract later this year.

If Korea gets the Turkish contract, it would follow its success in winning a $20 billion contract last December to supply the United Arab Emirates with four nuclear power plants by a consortium led by Korea Electric Power Corporation.

The U.A.E. deal established Korea as an emerging player in the international nuclear industry sector as it competes against established companies from the United States, Japan and France.

Choi Kyung-hwan, Korea’s knowledge economy minister, and Turkey’s Energy Minister Taner Yildiz signed the MOU for the construction of a nuclear power plant in Sinop, Turkey, which is located on the Black Sea.

This follows an agreement signed in March between Kepco and Turkey’s state-owned Electricity Generation to conduct technical studies for the construction of the Sinop plant.

A contract for the Sinop project could be signed in November once a bilateral study of the project is completed in August.

“The Turkish government has confirmed through the MOU the high possibility of the deal being given to Korea,” said Kim Young-hak, vice knowledge economy minister. “The MOU calls for an agreement on the deal’s commercial aspects by this fall.”

Korea operates more than 20 nuclear plants and has achieved an unblemished safety record, but it used its ability to undercut the prices of its rivals in winning the U.A.E. contract, said analysts.

Korea is hoping to win future nuclear plant contracts in Poland, South Africa, Finland, Morocco, China and India, although it recently lost one in Jordan.

Officials from the Ministry of Knowledge Economy, however, cautioned that the Turkey deal was not in the bag. “The actual deal might not be concluded should there be disagreements with the Turkish government regarding specific conditions,” said a ministry official. “We’ll have to wait and see.”

The signing of the MOU came as Abdullah Gul, the Turkish president, is visiting Korea this week.

The nuclear deal with Turkey would open the way for other contracts with Korean companies.

“Should the [nuclear energy bid] become reality, Korea’s related industries will advance into Turkey and bilateral economic cooperation will enter a new era,” said Sohn Kyung-shik, chairman of the Korea Chamber of Commerce and Industry.