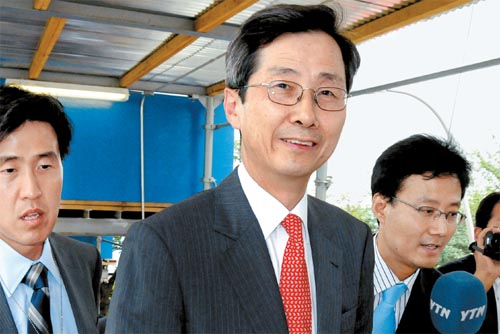 South Korean Ambassador to the UN Park In-kook at UN headquarters in New York on Monday after diplomats presented to the Security Council evidence that North Korea sunk the warship Cheonan on March 26.


NEW YORK - The diplomatic battle of the two Koreas has begun at the United Nations.

Both countries Monday held briefings for the 15 members of the UN Security Council to convince them of their contrasting stances on the sinking of the Naval ship Cheonan in March.

South Korea held the first, two-hour briefing. Experts from the United States, Australia, Canada and Sweden who took part in the monthlong investigation of the sinking also attended the meeting, which took place in the UN headquarters from 3 p.m. on Monday, New York time.

“All ambassadors from the 15 countries attended the event and we believe we presented logical and scientific explanations based on facts,” said a senior South Korean Foreign Ministry official. “The briefing went smoothly and no countries made remarks denying the results of our investigation.”

Seoul has been trying to convince the council to officially condemn Pyongyang for attacking the Cheonan, killing 46 sailors, through an official resolution or a less-binding presidential statement. 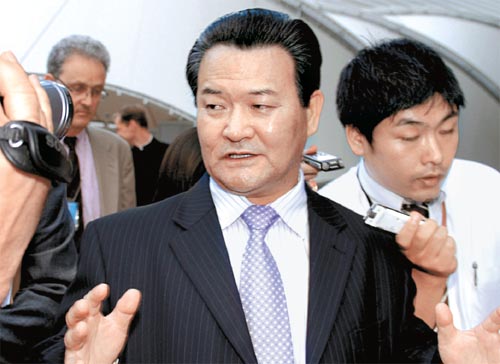 North Korean Ambassador to the UN Sin Son-ho fields reporters’ questions after his team’s separate briefing to the council. [YONHAP]

The closed briefing took 40 minutes and was followed by questions, mostly devoted to technical aspects, which lasted about 80 minutes.

None of the diplomats raised the issue of a letter from South Korean civic group People’s Solidarity for Participatory Democracy that questioned the veracity of South Korea’s investigation. The letter to the council last week said the probe report had “many loopholes” and “lacks convincing rationale.”

“The matters raised by the PSPD were never mentioned,” said the Seoul official.

Pyongyang has vehemently denied the charges, saying it had nothing to do with the Cheonan tragedy, and describing itself as the victim of a frame-up.

North Korea’s briefing followed, and its diplomats, led by UN Ambassador Sin Son-ho, presented their arguments for an hour. They took no questions. Park Tok-hoon, the North’s deputy ambassador to the UN, urged the South to allow Pyongyang officials to visit Seoul and investigate the evidence themselves.

“We are the victim here, as they [South Korea] blamed us even though we did nothing,” Park told reporters in New York. “[The South’s investigation result] is neither objective nor scientific.”

North Korean Ambassador Sin said he would hold a separate open media briefing at UN headquarters at 11 a.m. today, New York time, calling Seoul “shameful” for not allowing Pyongyang delegates to visit the South for its own investigation.

“We will explain everything at the UN, and South Korean reporters are all welcomed,” said Park.

South Korean Ambassador to the UN Park In-kook said the peculiar relations between the two Koreas make it difficult to invite North Koreans to view the evidence in Seoul. The two Koreas signed an armistice, not a peace treaty, to end the 1950-53 Korean War.

“If there is a problem between the two countries, it should be dealt through the military armistice commission of the UN command .?.?. and we told North Korea about this when it requested the visit,” Park told reporters in New York yesterday. Park, who attended South Korea’s briefing on Monday, said some countries on the council said they needed time to fully study Seoul’s report, but none rebutted the result of the investigation.

South Korean officials will hold another briefing for countries that aren’t on the Security Council, a senior Seoul diplomat said. Some 20 to 30 countries, including Australia and Canada, have been invited to the briefing at South Korea’s permanent mission to the UN Wednesday afternoon, New York time.